Review: The History of Black Dance in America 4 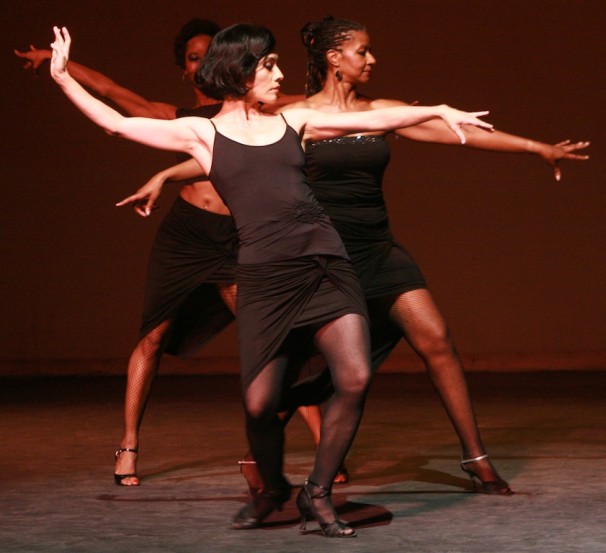 It’s a safe bet that many in the audience at Saturday’s vibrant “The History of Black Dance in America,” performed by Central Avenue Dance Ensemble at Cal State Dominguez Hills’s University Theater, while attending an event that celebrated African-American creativity, were nursing bruised feelings over the insane racist violence targeting black people that shamed our nation the prior Sunday, June 17, in South Carolina. 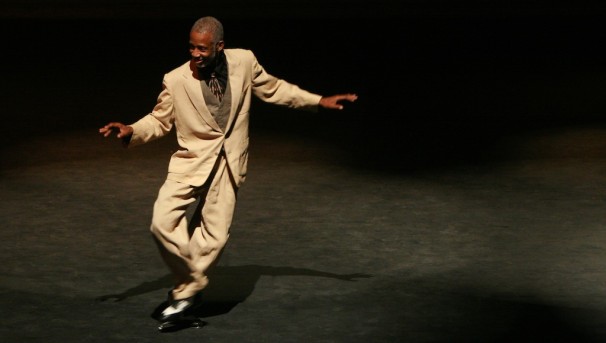 Why wouldn’t such feelings arise? The “Charleston,” the bubbly, fun-loving Ragtime dance named for the Carolinian city where it first surfaced, was among 25 featured dances Ron Parker (producer/director) and Chester Whitmore (artistic director) included in their vastly entertaining multimedia and educational performance-tour. The mission of “The History…”, which Whitmore first created in the 1990s but that Parker, adding historic content, has taken to a new level (and we’re hoping it has a future), is to acknowledge and value the enormity of African-American contribution to American social dance—and by extrapolation, to American society. In achieving this goal, and despite a somewhat rocky road in getting there, the audience-pleasing evening succeeds. 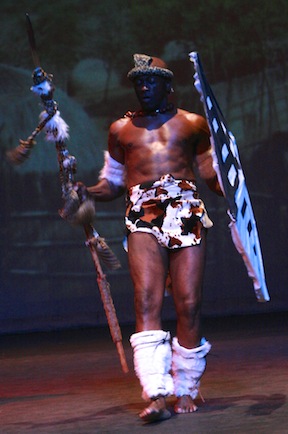 The program opens in great earnestness with an evocation of Zulu warrior dances, with Parker’s helpful textual voice-overs providing useful information and context. The scene then shifts to the New World, the milieu of the plantation, where slave dances were present from the get-go. Outstanding was a labor-dance, “Work Songs,” viewed in a gripping video in which three strong male dancers, Parker, Reginald Thornton and Whitmore, dressed in white tee-shirts, khakis and rope belts, sing and swing mallets to a dirge by Leadbelly. Just amazing.

The “Cakewalk” shows up. Such an important dance moment, it had its start as slaves clowningly mocked, through movement, their pretentious white owners. But it rapidly crossed back to white performers spreading the dance in proto-vaudevillian music halls (that pattern, in a nutshell, the history of black social dance). Then follows a parade of dance-floor fodder: “Walking the Dog,” Foxtrot, Big Apple, Lindy Hop and tap-dance show-stopper, “Shim Sham.” Fun costumes – feather boas, gloves, parasols, flouncy skirts, bowler hats – add interest. 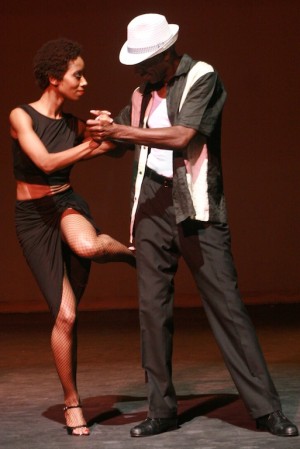 The program goes beyond its “showcase” format; it pleasantly pushes an educational agenda, keeping at bay anger that impinges at the edges. Everything is celebratory. A revelation comes in learning that ballroom dancing, the rarefied romantic pas-de-deuxs in which Fred and Ginger, Vernon and Irene, and Marge and Gower are considered masters, had credible contributions by a pair of venerable African-American artists who, due to the intimacy of the form, were marginalized: Margo Webb and Harold Norton.

The program’s equally wonderful second section – who wouldn’t have a ball knowing that disco dancing is coming their way — unleashed the Latin influence and, naturally, that’s when the sizzle set in. Thornton, a simply superb mambo dancer mesmerized, scoring well beyond his genre as a blazing 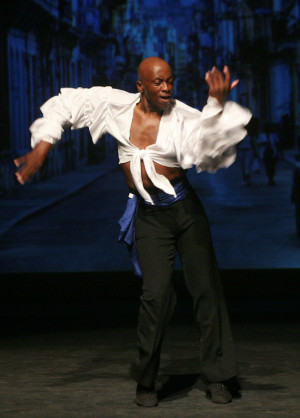 performer. Another highlight was an earthy and elegant tango delivered by Ron Parker and Kiana Stringfield. Here Parker, a stellar partner, danced his best. Then came a crazy tango-derived “Urban Ballroom,” viewed in video (this breaking of the live performance format didn’t disturb me, but, hey, I pass half my life on youtube.com). I was flabbergasted by “Urban”‘s relentless creativity as Ta Ronce Allen and Mike Tyus entangled to a schmaltzy love song.

When the silver disco ball descended, and on flickered the colored lights, a lot of baby boomers felt very happy. But before “Saturday Night Fever” 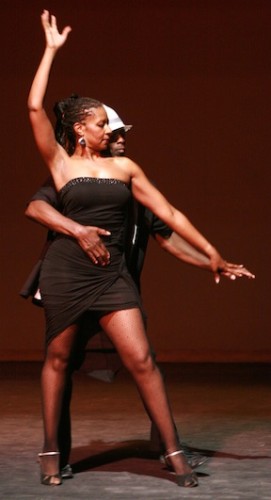 kicked in, meet the seminal movie’s choreographer – Lester Wilson, an African American.
The hard-hustling performers of the Central Avenue Dance Ensemble spanned a very wide range of dance levels, nonetheless every performer on stage delivered winningly and crossed the finish line, no small achievement throughout 25 numbers.

The production needs work! Better dancers, more clarity of imagery, whether still photography or video. It’s too long, not by much, but a few numbers could go. The written program, while a good start, needs citations and crediting. It feels like a lot of uncredited borrowing was on that stage, from choreography to video to text.

In short, “A History of Black Dance in America” needs what nearly every valiant dance production in our culture needs – an infusion of funds. But what it has on its side is forceful, undeniable and true – and that would be history.

4 thoughts on “Review: The History of Black Dance in America”