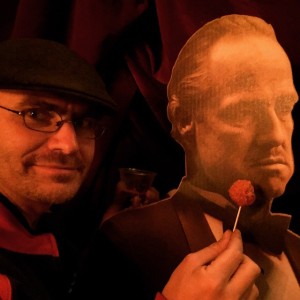 “That’s my family; that’s not me.” So Michael Corleone assures his blue-blooded girlfriend, Kay, in one of his character’s persistent moments of self-denial. First expressed in Mario Puza’s pulpy popular novel, a mega best seller published in 1969, the line was famously recycled in (then) newbie director Francis Ford Coppola’s iconic movie in three installments, THE GODFATHER (1972).

It’s a strategy that works — Kay joins the guns-and-roses Corleone clan. But we all know that, don’t we? The G.F.’s the myth of modern times; we can all mouth the dialogue. And in dance-theater troupe Theatre Movement Bazaar‘s Godfather-deconstruction (they call it a ‘vaudevillian collage’) a funny participation moment has an audience member mumblng Don Corleone’s lines. (The Don himself, as played by Marlon Brando, does not appear in “Big Shot”; so revered is the actor by the theater troupe, he’s the subject of a hushed song of worship.)

And in case you think the entire thing rests on Skeens’ uncanny physical resemblance to Pacino, think again — a  witty and hilariously written opening scene replicates a House on Un-American Activities Committee-style hearing that prosecutes Puzo for writing his book not as art but because he was desperate for cash. In this scene, Puzo is played by female actor, Caitlyn Conlin. 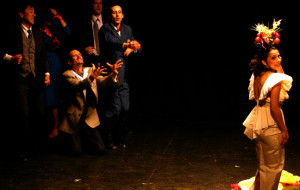 “Big Shot,” text by Richard Alger and direction and choreography by Tina Kronis, probes “The Godfather’s” thematic obssession with the ties of family and exigencies of business; the treatment of women in traditional Italian culture; the nature of courting and seduction and lots of stuff about the life Italiano. It endearingly twangs these tropes through composer Wes Myers’ blazingly original songs, wonderful dance movement, crystal-clear line readings and DNA-level ensemble coherence. You do wish the good-natured fun did not ride so heavily on ethnic stereotypes – kind of dated Italian representations, at the level of red-check tablecloths and wax-dripped Chianti bottles. O Sole Mio?? There has to be a way to re-invigorate the enduring cultural impact of the Godfather without hearkening pasta names. But, a minor quibble. Recommended.