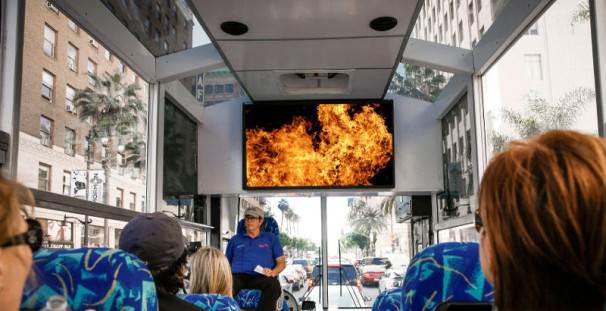 There are two in every crowd, and they usually end up sitting near me: the people who keep talking throughout the movie — or, in this case, the Movie Locations Tour. But on a bright spring morning, when I had the rare chance to play tourist in the city where I live, the gabfest behind me on the bus couldn’t bum my journey.

It was a journey built on movie fandom. The tour, offered daily through September, is the curatorial lovechild of TCM and Starline Tours, and though visitors to Los Angeles are the obvious target, it proved to be a treat for an Angeleno who usually views the city through the numbing stupor of traffic.

Better yet, it’s a chance to take those burning movie-geek questions beyond the virtual plane of Mapquest searches. Buildings that looked so glorious in black-and-white or Technicolor are suddenly right outside the custom-built window, ghostly and defiant. And inside the vehicle, selected clips play on a 65-inch high-definition screen, making comparison a cinch. On the one hand, the actual place; on the other, the place as it has lived in our hearts and minds — reimagined, repurposed, reconfigured for such indelible films as “Double Indemnity” and “Blade Runner,” and in some ways more real. 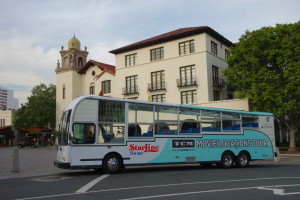 Winding its way from the Hollywood & Highland complex, where the TCM Classic Film Festival kicked off Thursday evening, the tour heads through a district of workaday studios (Paramount is the only one of the big multinationals on the itinerary) and the Wilshire Corridor on its way downtown — in short, a collection of art deco facades and edifices.

As TCM host Ben Mankiewicz said when he greeted the busload of journos, “downtown L.A. is shockingly beautiful.” (Mankiewicz doesn’t serve as tour guide, but he does appear in interstitial videos that provide breathers for the hardworking guide — in the case of the press tour, a man with ace comic timing and deep movie love who referred to himself as Michael O.) 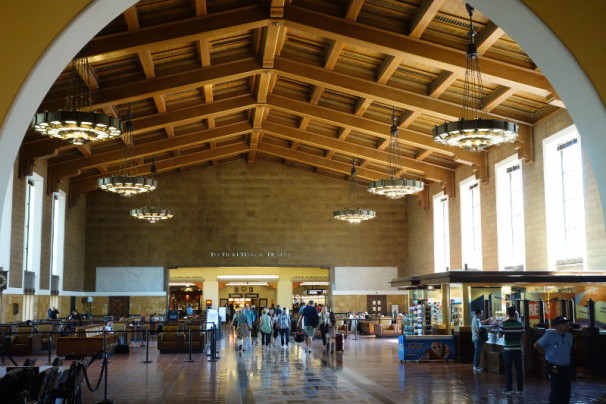 Los Angeles is a city that has been struggling to understand the shocking beauty of downtown for decades; until recently, we embraced it less readily in the day-to-day than in the memory landscape of movies. That landscape, which includes the lost community of Bunker Hill, is the territory of film noir in particular. A spinoff tour specializing in noir locations would make this film critic swoon (in the Bunker Hill section, clips of “Kiss Me Deadly” and “The Exiles,” please!). But the existing tour gets major points for its interest in such gritty gems as 1951’s “Cry Danger,” starring Dick Powell. 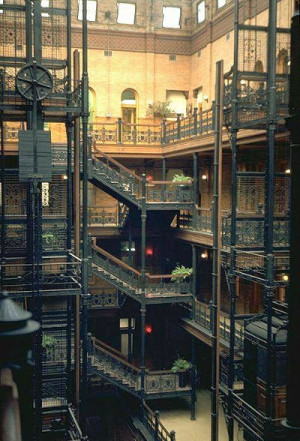 The tour’s two stops are among the most well-known and frequently used of Los Angeles movie locations, but even seen firsthand, they never lose their luster or mystery: the Bradbury Building and Union Station. Each has borne witness to countless crimes and deceptions and double-crosses, and they both stands as temples of civility and cool shadow, fantastical places of limitless possibility, straight out of dreams.

And then there are the movie palaces along Broadway, some refurbished, many shuttered or reincarnated as jewelry marts or churches. I’ve seen them hundreds of times, but never before viewed them at marquee level. It makes a difference.

Best of all, as the tour passed through my neighborhood on its way back to Hollywood, I learned a few things about places I pass every day and have wondered about. In the case of one such place, a preserved art deco building posing as a nondescript business, I didn’t learn about its origin or its glamorous heyday, but about one of its many lives. Michael O. showed us a clip in which the building was dressed up as a movie theater in “L.A. Confidential” — nothing unusual in a city that never tires of playing itself.