A triumph for ABT, Ratmansky’s “The Sleeping Beauty” 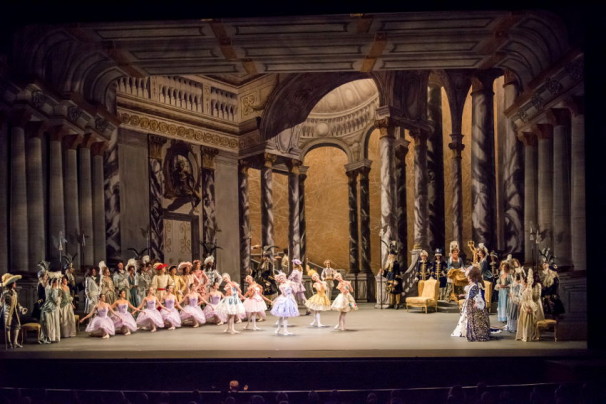 American Ballet Theatre celebrated its 75th anniversary last evening at Segerstrom Hall with its sublime new “The Sleeping Beauty” staged by Alexei Ratmansky using original choreography by Marius Petipa interpolated with contributions of his own. The sheer beauty of the production and the revelation of how fresh and compelling the Petipa language positions our national ballet company where it belongs, as a prime keeper of the 19th century classical canon.

The historic re-staging, by burrowing into the past — reconstructing with authenticity the French-born master Petipa’s great lore of moving vast groups of dancers on stage — augurs a return to physical coherence in ballet. Nary a distended nor distorted line of the body was on view in the three-act, 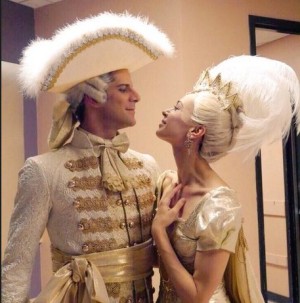 three-hour showcase; by contrast, out spewed a rich array of new (old) balletic body shapes. Extremities (that’s dance jargon for arms and legs) cleaved close to the torso enriched by twists, torques, oblique angles, curvaceous port-de-bras. Heads were held high, with proud strong  gazes (Marcelo Gomes, as Prince Desire, outstanding in this regard). All of this, highly disciplined, created a new and sensational viewing experience, and that’s just the choreography  — it was much augmented by beautiful production design. Gone missing: the now-ubiquitous virtuosic bells and whistles, overreaching leg extensions, colorless placement of torso that I pray, in glimpsing the thrilling possibilities of choreography of great physical good taste, will begin their hasty retreat.

What I am conjecturing is that Ratmansky’s painstaking re-staging of century-old choreographic style will have a strong impact on young dance makers. When in doubt, look to Petipa! Balanchine did, and look where it landed him.

The new “Beauty” production was sorely needed (read my strong call for retiring ABT’s prior production in my Los Angeles Times  review 2010). Nearly three million dollars later, a compelling cross-fertilization of the visual with the performing arts, as Richard Hudson’s museum-worthy costumes (inspired by Léon Bakst‘s designs for Diaghilev‘s Ballets Russes) populated the stage, by turns in clusters of muted palette and then out would pop a color-zinger — vivid blues, a hot red. Gold tones abounded. What a pageant! A costume for the Queen mother, on its own, garnered applause.

Thus we pray, as well, that ABT’s new “Beauty” hearkens the return of the dressed dancer. Capes, hats, wigs, props all make the man (or woman, or child), adding luster and finishing touches to the elegant comportment seen on stage last night. It started with the dazzling duo in the photo, Marcelo Gomes as Prince Desire squiring Diana Vishneva as Aurora, right down to the many kiddies tromping through “Beauty” land. Hordes of bodies on stage!

The ballet matters. Less a showcase for its stars (and there are at least five fine roles in “Beauty”‘s top roster), one of the great virtues of the production is that it’s not “all” about the stars, rather about the power of a thwarted community to fend off evil, opting for a world of coherence, clinging to high virtue, cleaving to harmony not discord. It calls for a similar bonding of our civilization against the evil forces that plague us today. Listen up, people, dance has something to tell you.