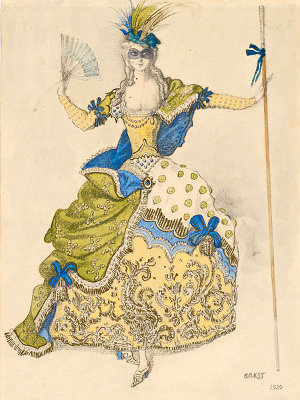 We await with great anticipation our voyage southward along Ye Olde 405 Freeway to Segerstrom Center for the Arts to experience the newly mounted production of “The Sleeping Beauty” — a joyous celebration of American Ballet Theatre’s 75th anniversary, choreographed by Alexei Ratmansky based upon original choreography by Marius Petipa.

This production is a partnership between ABT and Teatro alla Scala that will move from Orange County to the Metropolitan Opera in May and onward to La Scala in September.

Primary among our high expectations is new costume design by Richard Hudson, 350 – 400 costumes that have been created (with modern updates of fabric and cut) as inspired by the past, viz., by the costumes of Léon Bakst (1866-1924) that were used in Diaghilev’s infamous staging of “The Sleeping Princess” for the Ballets Russes in London in 1921.

But ABT’s new “Beauty” is far from Southern California’s first opportunity to bask in Bakst! The great man journeyed to our fair climes in 1924 … ninety years ago … to deliver a lecture series following his “Beauty”ful achievement for Diaghilev. (It was, alas, the year of Bakst’s death.)

This we learned from “The Art of Concealing Imperfection: Léon Bakst and Southern California,” an essay co-authored by John E. Bowlt and Elizabeth Durst and just published in “Kinetic Los Angeles: Russian Emigres in the City of Self-Transformation,” the latest volume of “Experiment,” a journal of the Institute of Modern Russian Culture at the University of Southern California.

According to the scholarly but never stuffy essay, the great art designer gave three lectures in February 1924, respectively, at the Biltmore Hotel downtown, Bovard Auditorium at USC and then in Pasadena. He delivered a pre-prepared text, in French, using a translator.

The image at left (click on it for detail) shows that Bakst’s lecture series ranked below the main cultural event in town: the screening of Cecil B. DeMille’s (first version of two) THE TEN COMMANDMENTS (1924).

But the announcement sits firmly atop news of a boxing match between Sid Barbarian and Phil Salvadore. The L.A. Times got that right.

Bakst came to L.A. to make a few bucks. Who didn’t? In the essay, he is quoted:

I spit upon honor, glory, kindnesses and receptions. I’ve come to America to augment my capital. I’m quite indifferent to everything else.

Although the essay recounts Bakst’s deep frustration in collecting his proper fee, it also describes his rich experience dressing wealthy women and chic movie stars like Nita Naldi, as well as the design inspiration he received from the visual world of native Americans.