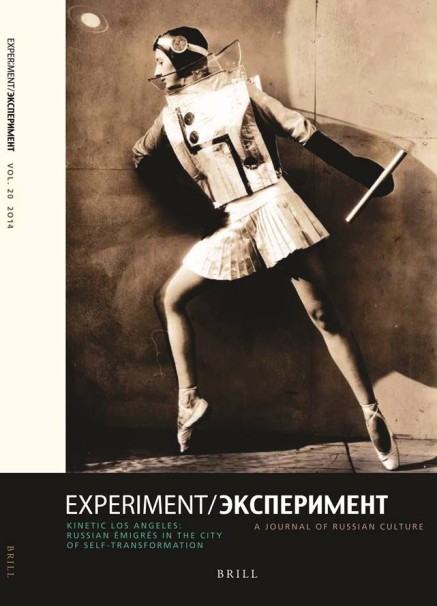 This startling and marvelous image of a ballerina garbed in an unprecedented and surely unreplicated costume graces the cover of “Kinetic Los Angeles: Russian Emigres in the City of Self-Transformation.” The journal, the 20th edition of the esteemed “Experiment,” has just been published by the Institute of Modern Russian Culture at the University of Southern California in tandem with Brill Publishers in The Netherlands. It is available for sale on line.

Photograph data: Elise Reiman in Adolph Bolm’s The Spirit of the Factory at the Hollywood Bowl, 1931. Costume by Nicholas Remisoff. Photo courtesy of the Jerome Robbins Dance Division, York Public Library for the Performing Arts.

This volume of Experiment is dedicated to the contributions of Russian performers and artists who lived and worked in Los Angeles in the fields of dance performance, visual arts, and film, exploring how the city was influenced by their presence as well as the reasons that drew them to Southern California.

Aligned with the modernist endeavors of Sergei Diaghilev’s Ballets Russes, yet decidedly “LA” in style with their proximity to Hollywood, Russian artists changed the landscape of choreography, performance, and design for both the concert stage and the silver screen.

Contributing arts and dance writers and their essays: