Jerome Robbins, in 1947 the king of high/low art 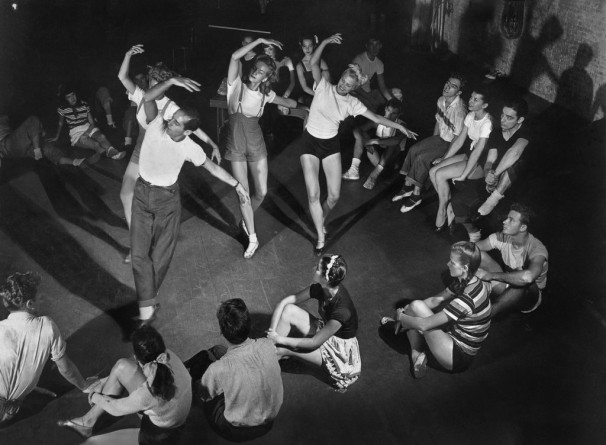 The highlight of the original production was a long (7-10 minute) ensemble dance number (“The Bathing Beauty Ballet”, to the song “On a Sunday by the Sea”) at the beginning of the second act. Choreographer Robbins staged this number in the manner of a Mack Sennett silent slapstick film. It uses the music of “On A Sunday By the Sea”, Liszt’s Second Hungarian Rhapsody, and Offenbach’s can-can from Orpheus in the Underworld. “This number was so basic to the show that deleting it would render the evening incoherent. It was a major evocation of a period, a tribute to silent-film comedy.”

Amanda Vaill, in her biography of Robbins describes this dance number: “The actors career across the stage, in and out of a row of boardwalk bathhouses, slamming doors, falling, rolling, leaping to their feet, colliding with one another, in a masterpiece of intricately plotted chaos that bears all the marks of the developing Robbins style: wit, character, drama, and precision.” 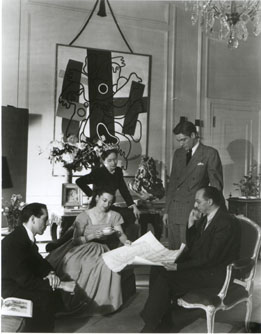 The forties were a critical decade for American ballet. Robbins was a key influencer, a popularizer, a democratizer of ballet. Like Agnes deMille, Eugene Loring, and others, he staked a claim for Americans in a European art form.

Meanwhile, uptown from Times Square, also in 1947, Jerry’s “other” life on view in the photo, at right, in which the members of the Artistic Committee of [American] Ballet Theatre convene:  Jerome Robbins, Lucia Chase, Agnes de Mille, Oliver Smith and Aaron Copland.

Robbins’s exceptional “high-low” instincts were a gift to American dance.