“Bebo’s Girl,” at fifty, to screen at MoMA’s “To Save and Project” 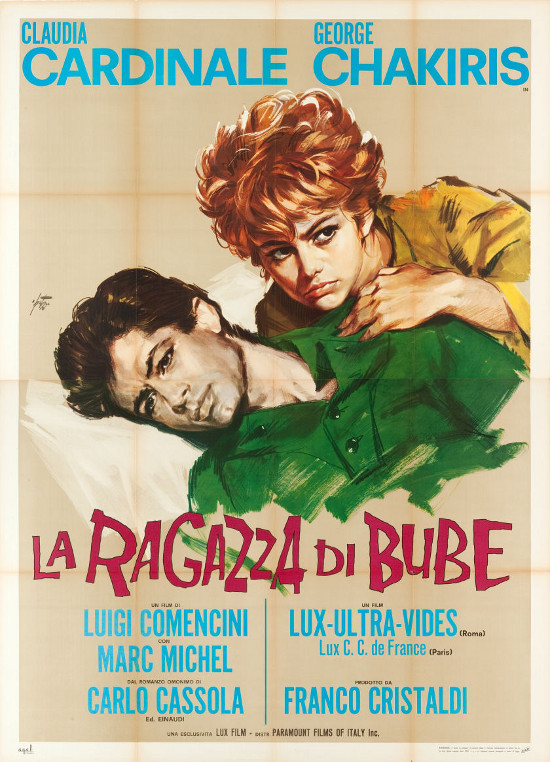 Fifty years ago, in November 1964, a beautiful and moody Italian film, La Ragazza di Bube (Bebo’s Girl) opened in theaters. Based on an acclaimed novel by Carlo Cassola, the film recounts a love triangle in an anguished and entangled setting: Italy’s post World War II struggle to come to grips with its fascist experiment and its leftist aspirations. Director Luigi Comencini’s striking location shooting captures the ragged landscape of a war-torn nation.

The movie motors serenely on sensitive leading-role performances by Claudia Cardinale and George Chakiris, both beautiful young actors bringing soulful sadness to their pairing. “Bebo” will screen on October 27 at 7:15 p.m. at the Museum of Modern Art in New York City as part of the “To Save and Project” annual film preservation festival. The screening will be preceded by George Chakiris: A Life in Film, an in-person interview with the film’s star. arts·meme‘s Debra Levine will conduct the interview.

At the end of World War II, shallow, self-centered Mara (Cardinale) is the prettiest girl in her small Italian village; Bebo (Chakiris) is a Communist partisan who is finding it difficult to adjust to the dull banalities of life in peacetime. When Mara’s father, a passionate Communist, declares that his daughter will marry the returning hero, her reactions range from joy to bitter resentment, as director Comencini—one of the greats of Italian comedy, here deftly turning his hand to drama—traces her development from a flighty adolescent into a mature woman. Though dubbed in Italian, Chakiris creates a stirring portrayal though posture and movement as the dazzling but deeply flawed Bebo, who seems to lose his heroic dimensions as Mara’s grow. Preserved print from the Cineteca Nazionale, Rome; courtesy Cristaldi Films. In Italian; English subtitles. 106 min.