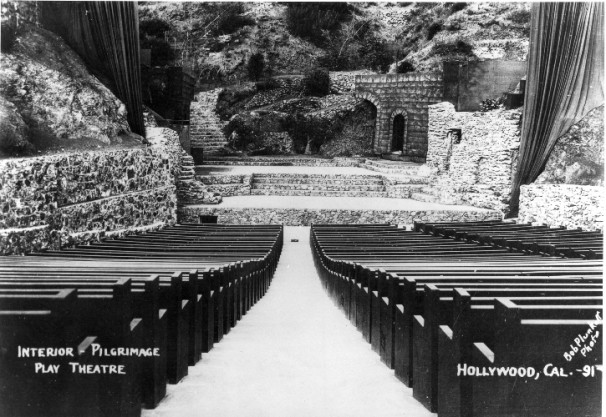 L.A.’s big dance weekend — it had the dance-infatuated scampering up the heights of Bunker Hill, across the Cahuenga Pass and down Laguna way — has come to its close. Certainly the weekend’s big draw was the launch of a new contemporary dance company, Ezralow Dance, an event that also closed the Ford Amphitheatre for a $20mm renovation. Everyone who is anyone in the L.A. dance world scaled the Ford’s steep outdoor staircase, juggling wine, cheese, and even thou in the climb. And there, on a hot summer-ending Saturday, the historic outdoor stage set in a cliffside (the theater’s back wall a vertiginous mix of rocks and fir trees) hosted Ezralow, a California native, the former founder of Momix and a Cirque de Soleil dance maker, in a concert-dance outing of so-so caliber. More on that later. 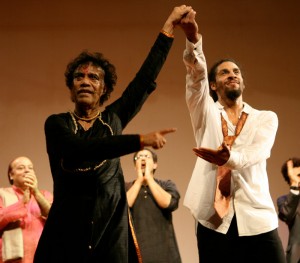 Framing the Ezralow show were two dance performances of unabashed excellence. The first was a proud presentation of Indian Jazz Suites on the wonderful Bunker Hill stage of Grand Performances — another of L.A.’s plein air venues. An urban mix of ethnic Indians (many families), African-American jazz lovers, downtown hipsters, and well-cocktailed office workers lingered Friday evening (the audience was keen and smart) to imbibe the amazing joint talents of dancers Chitresh Das and Jason Samuels Smith.

The splendid setting contributed to the performance’s charm and success. A sensitively miked hard-wood stage (this matters, the show mixes tap and Kathak dance, the entire performance a paean, really, to dance’s rhythmic element) floated like a lovely island in the massive water fountain encircled by behemoth business towers. Gradually, a bubble of happiness enclosed the entire enterprise, bonding audience with stage. 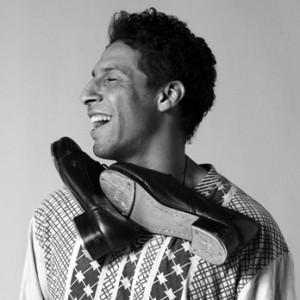 Smith, who has collaborated for a decade with the veteran Kathak man (a documentary about their distinctive partnership highlighted this season’s Dance Camera West festival in June) opened the program with four solo numbers. His quirky use of his entire frame, emphasis on his tap shoes, in accompanying jazz standards delivered by a three-piece combo, reached new expressive heights, even greatness. Smith, a Gregory Hines protege, seems to have lost weight and renewed his focus (and caring). He danced deeply, that’s all I can report, displaying profound integration of dance with music. And I love what he does; it’s improvised, it comes in spurts and splatters with rests between the long tap phrases (the viewer needs them, too, as the dancing is surprisingly heady.) In his brilliant laying on of rhythm, he likes to drag the side of his shoe to give undertow to the hard downward accents. 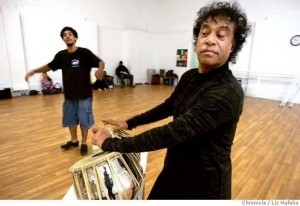 Then enters Das, all dancer, his head wild and mangy with curly locks; he’s donning a mike so we can hear his baby-talk babble, rat-a-tat-tat, as he stamps in barefoot. He’s rapping, really, making brilliant and unexpected noises in self-accompaniment. He’s clowning around, then educating, and he’s at his most sparkling when he dances while drumming on tabla.

When these two take the stage together all bets are off. It’s synergy; it’s dance respect. The showcase closed in trading eights .. a jazz tradition of round-robin swapping of bars of music between contributors – first Smith, then Das, then the Indian musicians then the jazz players. Round and round it went, each player maximizing his eight beats, slyly trying to out-fox, if not trip up, the colleagues. Then a tightening – they traded fours. Then a new tightening to traded twos. At that point, ecstasy set in, a pinnacle of performance perfection, no one slipped, no one missed, the rhythmic heat was on; it was blasting, the audience was on board and the all of Grand Performances seemed to ascend toward a combined Kathak-and-tap-dance heaven. 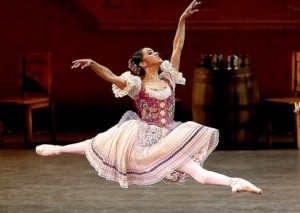 Back down to earth, on Sunday afternoon, a slide down the 405 freeway for the closing bill of the Laguna Dance Festival – on this matinee a mixed repertory program featuring stellar classical dancing by San Francisco Ballet artists Lorena Feijoo and Vitor Luiz, a stunning couple in Yuri Possokhov’s “Talk to Her,” a rare pas de deux that really melded. So thrilling to see highly trained dancers after the pretty middling group Ezralow fielded at the Ford. Opening the show was red-clad Gonzalo Garcia of New York City Ballet, cooly confident, indeed charming, in a solo work by Lar Lubovitch. Garcia then partnered high-flying American Ballet Theatre ballerina Misty Copeland. Slightly forcing her smile and overdressed in a fussy frock, Copeland was nonetheless a marvel cruising as Coppelia on her million-dollar legs. The program second half, just fabulous, a groove, courtesy of Complexions Contemporary Ballet in Dwight Rhoden’s suite of dances to music by Stevie Wonder. The company, a frequent friend of Laguna Dance Festival, danced in wonderful condition, its outstanding young talent featuring a delicious line-up of pretty girls of every color (thus, “Complexions”). Among the fine male dancers out popped a newbie named Addison Ector, a product of Debbie Allen Dance Academy.