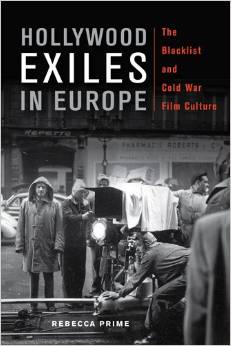 Whose good idea was this film series? One person, Rebecca Prime, author of the recent Hollywood Exiles in Europe: The Blacklist and Cold War Film Culture, certainly inspired it.

Working with UCLA Film & Television Archive, Prime has co-curated a line-up of works by Jules Dassin, Joseph Losey, Cy Endfield, Ben and Norma Barzman, and Donald Ogden Stewart produced in London, Paris and Rome in the late ’40s thru the ’50s. All those creative folk were hounded from earning a living in the industry town of Hollywood by the blacklist.

We particularly like the program next Wednesday August 13, and we plan to attend. Anything in which Paul Henreid was cast gets the arts·meme seal of approval. And what about this movie tagline: “She went to France …. for lessons in love”? Zut alors, whatever she learned, we want to learn too!

How fitting to view this pair of movies at Film Archive’s theater named for Billy Wilder, a political and cultural exile in the other direction. Wilder did well in his adoptive home. Let’s see how others did in Europe.

Pardon My French (France/U.S., 1952, dir Bernard Vorhaus)
Part of a short cycle of dual-language Franco-American co-production, Pardon My French features Merle Oberon as a New England schoolmarm who inherits a French chateau run as a home for displaced war orphans by a bohemian musician (Paul Henreid).  While the romance that ensues plays out in terms of cultural clichés, the evocation of France’s immediate postwar context reflects the blacklisted exiles’ commitment to social cinema. 35mm, b/w, 82 min.