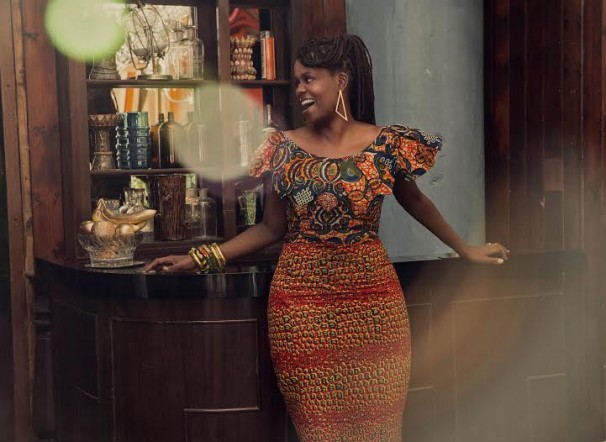 I’d never heard of her but liked her look on the press announcement: the youthful but knowing joy of her open smile, the color riot of her wax print dress celebrating the burnished brown of her skin. Tickets only £10 (in Shoreditch?)The London launch of Lagos Music Salon, her new cd from Okeh. I remember Okeh from back in the day, boogying down to Major Lance and Curtis Mayfield, but have heard that it’s a jazz label now, owned by Sony. There was a youtubelink with the release but I didn’t bother. I invited a Nigerian girl friend and we hit Shoreditch on a Friday night trending to the max with World Cup mania flushed in midsummer light. Okay. 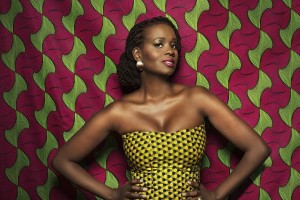 We were in the Ace Hotel’s basement Miranda room, medium-size, spare but welcoming. Somi and her four-piece back-up entered only 15 minutes past time, radiating good will, confidence and ease. Another glorious wax dress enhancing what folks once might have called her “fine brown frame”, an orange necklace I wanted. They began. Well-honed jazz complexities and driving polyrhythms from the git-go and good God almighty but this woman can sing! Subtle expression, incredible range, sophisticated control of voice. Lots of referencing: Mariam Makeba, Nina Simone, Dianne Reeves, for me Sarah Vaughan the strongest, but the end result totally her own.

She was fluid with the mike as well – what you’d take for control-paneled fades effected by moving it and/or herself gracefully this way and that. Self-written material in a multitude of languages, English, Swahili, Kinyarwanda and Rutooro; and since much of the on this new cd are reveries on a recent months spent in Lagos, Igbo, Yoruba and Nigerian Pidgen as well. A linguist with serious training then, who’s been around for a while, doing gigs with the likes of long-time mentor Hugh Masekela, and the likes of BaabaMaal, John Legend, Paul Simon to name just a few; and me just hearing of her now?

Somi isn’t Nigerian. She was born in Illinois to immigrant parents from Rwanda and Uganda, spent her early childhood in Zambia. A self-confessed “classical nerd” as she was growing up, she studied cello seriously for many years, a synchronicity since her voice has nearly that instrument’s range and certainly its sensuous sonority. I’m wanting to know more of her as time goes by, but ultimately what matters most is her incredible sound, that her virtuosity is enhanced by a heartening empathy for those around her, both her audience and those whose stories have fired her creativity.

All of the band are worthy of mention: Michael Olatuja on bass, Liberty Ellman on guitar, Jerry Leonide on piano and Otis Brown on drums moved with full-on dexterity between hard-bopping jazz to rural African licks to American/African rhythm and blues. All for £10 entry and no cover? That’s not going to happen again.

Candace Allen lives in London. She is the author of ‘Soul Music The Pulse of Race and Music.