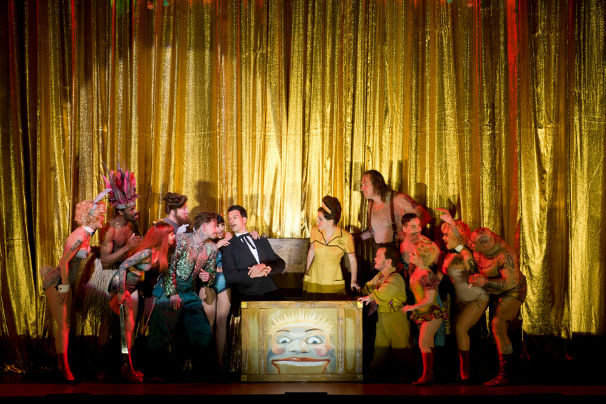 PausePlayPlayPrev|Next
How do you solve a problem like Cosi — Mozart’s Job-like musical glory of messing with the minds of two women on a bet, just to prove that they’re “like that”? In the words of Peter Sellars, prior to his revisionist diner production more than twenty years ago: “Is this the most offensive anti-feminist opera ever written, or an exploration of the outer weird edge of the human psyche?” Sellars decided to riff on the latter to quite unsettling effect. Cosi can be like one of those conjures of your head landing in your hands before your even knowing you’ve been cut and, despite the divinity of Mozart’s music, I’ve found it all too painful, avoiding it for an entire decade.

But those who follow my London bulletins know I’m a sucker for the English National Opera, the ENO, almost always ready to try what’s on their menu. All the more so when plated by Phelim McDermott and his Improbable team, whose previous productions — Philip Glass’ Satyagraha and The Perfect American, the Met Opera pastiche Enchanted Island, the terrifying Shockheaded Peter – have been triumphs of the visual imagination. So there I was, on opening night, prepared to be amazed. 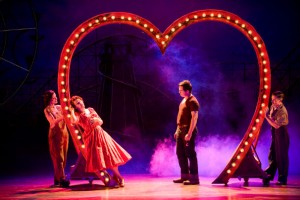 In terms of the production, amazed I was. In a move sure to appeal to its future Met Opera audience, McDermott’s Cosi takes place in 1950s Coney Island, first introduced before the curtain with a “Skills Ensemble” of side-show performers with Don Alfonso (the remarkable Roderick Williams) as suave but sleazoid ringmaster. As in Satyagraha, the Skills Ensemble serves as combination silent Greek chorus and most graceful stage hands, one moment posing in sign-flipping, fire-eating and acrobatic tableaux vivants, the next powering carousel horses and teacup rides in perfect undercurrent to the music. Set designer Tom Pye’s Coney Island and tacky Skyline Motel, sublimely enhanced by Paule Constable’s lighting (reminding this former cineaste of Francis Ford Coppola’s One From the Heart) were a happy combo of beauty and wit.

On the musical side however, not so much satisfaction.

For ears now attuned to the particularities of early music instrumentation and expression, Ryan Wigglesworth’s conducting sounded anodyne and recitative passages smacking of lounge piano style — an unfortunate choice. I disagree with those who found Roderick Williams too young for Don Alfonso’s worldly cynicism, especially in the carney context, where many enter young and age quickly. I found his singing and acting exemplary, both slyly penetrating and nimble Mary Bevan’s Despina was also a winner, but save for Christine Rice’s Dorabella, the characterizations and dilemmas of the four lovers felt underdeveloped, going through motions without due consideration to the weights of this deceit. One can expect a somewhat stronger cast at the Met and hopefully time for deeper emotional exploration as well. A production with a future then, which I would happily revisit.