A rumble, with love, at Miami City Ballet 2

Valentine’s Day love continues to take new and different forms. This year, February 14, 2014, in serendipitous Miami, Florida, a love connection of a special sort occurred at the Adrienne Arsht Center for the Performing Arts. It was a backstage visit by Oscar-winning dancer/actor George Chakiris following Miami City Ballet’s premiere performance of “West Side Story Suite.” Jerome Robbins rendered the balletic version based on his original creation, first, for his Broadway play, then for the classic Hollywood movie. 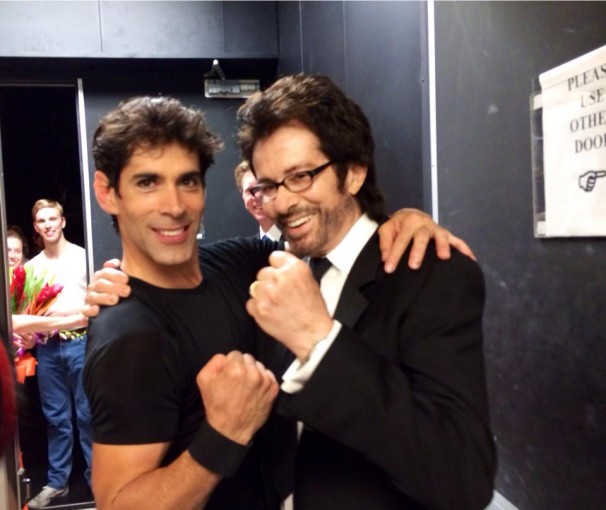 In the photo Chakiris rumbles with MCB principal dancer, the Cuban-born-and-trained Reyneris Reyes, who brings new dance interpretation to Chakiris’s iconic role of ‘Bernardo,’ leader of the Sharks gang. In a nanosecond, the pair of sensitive dancers morphed into macho mode and fisticuffs erupted. In their use of body language (also known as “dance”), the two men spanned an age difference of some 60-odd years.

Arranging the guest visit of Chakiris — he hosted a post-performance gala celebrating one year of her oversight of the Miami company — was MCB Artistic Director Lourdes Lopez.

Said Lopez, “It was a thrill for the dancers to meet George, especially since so many of them kept playing the film over and over again. For me, it brings the production full circle, one generation meets the next and the cycle continues, as it should.”

Chakiris, for his part, was motivated to share his respect and gratitude for Robbins, who first cast the (then) gypsy dancer, in 1958, to play “Riff” in WSS’s London stage production and then swapped his casting to “Bernardo” for the movie — a performance which garnered for Chakiris an Academy Award. Addressing the attendees of a joyous, sold-out gala dinner, the still-youthful Hollywood legend gave remarks:

I only recently learned it was Jerry who cast me as Riff, and as Bernardo, and I very much need to say something about Jerome Robbins.

Working for Jerry was challenging from the very first moment. It was never easy. But I loved every minute.

He was by nature a perfectionist, first with himself, and by extension to all of us.

When he walked into rehearsal, there was electricity in the air.
His standards were high, amazingly high, and trying — WANTING to rise to his level of expectation was an immediate, almost survival instinct.

There was an enormous, beautiful need to please him. I had such loveand respect for him.

Jerry was genius, not a word to toss around lightly.

I am forever grateful to him (for casting me as Riff and as Bernardo) and I often wonder what my life would have been like had I not been blessed with the opportunity of working with and for this extraordinary man.

Performance features a killer “Anita,” the sizzling and confident Jeanette Delgado. Also on the “Triple Threat” program: a marvelous historic restaging of “Episodes” (1959), a neoclassic masterpiece by George Balanchine that incorporates a solo for a barefoot modern dancer, and the choreographer’s great crowd-pleaser, “Tchaikovsky Pas de Deux.”

2 thoughts on “A rumble, with love, at Miami City Ballet”