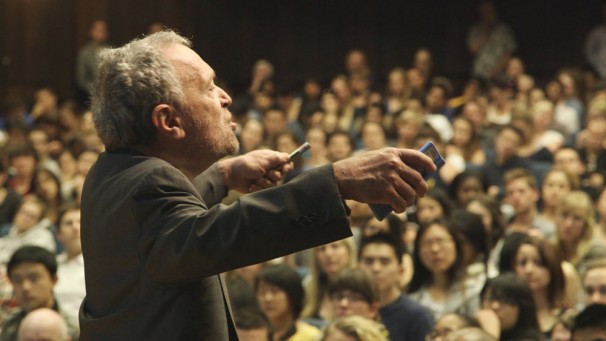 When it comes to big ideas, movies are usually a poor substitute for books. A few movies are able to put them across in new and meaningful ways; the best in the past decade are David Barison’s and Daniel Ross’ astounding essay film, “The Ister,” on the cultural and intellectual history of the Danube river, and Adam Curtis’ astonishing string of films for the BBC, especially “The Power of Nightmares,” which detailed the parallels of Islamist radicalism and American neo-conservatism.

The American brand of the big idea movie is generally softer and sweeter than these, sort of like our food. Compared to Curtis’ whole grain and high fiber, “An Inconvenient Truth” and “Waiting for Superman” are Wonder Bread sandwiches. The latest big idea movie, “Inequality for All,” (Arclight in Hollywood, The Landmark in Westwood) has a bit more fiber because it serves as a vehicle for the notions of progressive economist and former Labor Secretary Robert Reich.

Reich admits about two-thirds into the running time that he’s been sounding the same argument for 30 years, which is that the American middle-class—and, by turn, the Republic—suffers when wages are at best stagnant and the gap between the highest and lowest incomes grows. With useful motion graphics and a bevy of academic research, Reich demonstrates that peaks in income inequality predict economic crashes, in both 1928 and 2007.

And in a revealing find, Reich explains that American economic prosperity is best and most widely shared when the highest tax rate is higher (70-90%), and poorest and most restricted when rates are lower (35-38%), as they have been since the Reagan Administration.

“Inequality for All” is fashioned along the familiar info-doc model of “Inconvenient Truth” (the subject-hero delivering a lecture, snazzy graphics supporting the argument, individual stories illustrating the points even more), but it’s better argued. Reich’s case that recent American history is the story of the victory of liberal politics and policies is indisputably true, but the movie’s call for citizen activism is unfortunately weak, like an afterthought. It leaves a mystery: Liberals win in the long run, but why don’t they believe enough in what they support?