We’re pleased to re-publish this wonderful essay by guest writer, Jan-Christopher Horak, Director of the UCLA Film & Television Archive, who first wrote it for his blog at the Archive.

Grauman’s Chinese Theatre on Hollywood Blvd. is an iconic landmark of the studio era. Any day of the week you can find legions of tourists bending down to photograph the hand and footprints of classic Hollywood stars, a tradition Sid Grauman began when he opened the theater in 1927 with the premiere of Cecil B. DeMille’s King of Kings. 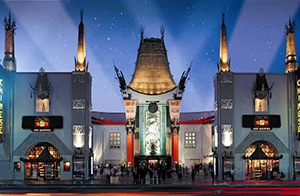 The classic movie palace is now called TCL Chinese Theatre, renamed after TCL purchased the theatre in January 2013. TCL is a multinational electronics company headquartered in Huizhou, Guangdong, China, which is the sixth largest producer of televisions and now LCD screens. The theater was closed in May 2013 for renovations, which included tearing out the first balcony and turning the space into the country’s largest IMAX with stadium seating.  It reopened last Sunday with the premiere of The Wizard of Oz (1939, dir. Victor Fleming) in digital 3-D, exactly seventy-four years and one month after the original Technicolor version premiered. 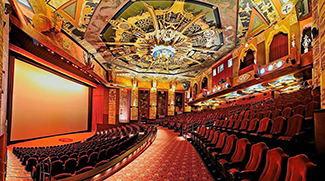 I know there are movie theater purists who will decry the destruction of Grauman’s Chinese Theatre, which is registered as an historic landmark, but I guess I would rather see the theater continue to survive as a screening space for IMAX, than turn it into a supper club or Christian revival house, as has happened to some of the other single screen movie palaces on Hollywood Blvd. Obviously, the theater has less seating, but the ornate interior ceiling and some of the side wall decorations remain that were designed in a faux Chinese style by the original architect, Raymond M. Kennedy of Meyer & Holler. 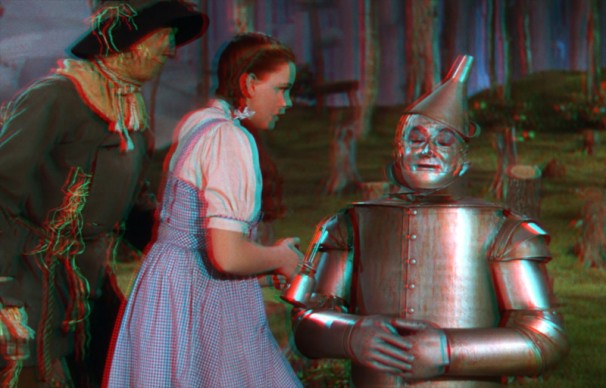 Seeing The Wizard of Oz in 3-D was of course a wholly different experience. Like many baby boomers, I first saw the film as a child in black and white on television, probably in 1957, a year after its initial television premiere and the beginning of an annual tradition. My parents didn’t get a color TV until much later in the 1960s, so I never saw the film in color or on a big screen until I became a film archivist at George Eastman House in the 1980s, when we showed a 35 mm Technicolor IB print. Eastman House also had the original Technicolor negatives, which I’m assuming were scanned for this iteration in 3-D.  I do remember being scared out of my wits as a child by the flying monkeys and the “Wicked Witch of the West.”

The most eye-popping 3-D in the film is right at the start with the original credits, which now seemingly appear just past your own nose. (A five year old girl next to me kept reaching out to grab the text.) 3-D adds little to the original black and white (i.e. sepia scenes) in Kansas, or, surprisingly, to the scene inside the twister. Two scenes, however, now stand out. The opening tracking shot from the fallen house through trees and bushes, then circling around to reveal the round red and yellow square in front of Munchkinland takes on a completely different spatial quality in 3-D. The extreme digital sharpness makes the flowers and plants (and later the cornfield) look like they are made of glass or cellophane. On the other hand, the wires carrying the flying monkeys that were visible in previous digital versions have been digitally removed. 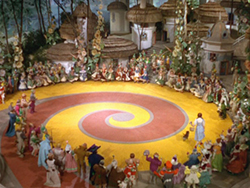 Secondly, the long corridor Dorothy’s motley crew must traverse to get to the Wizard’s inner chambers is now a seemingly endless tunnel, especially when the lion dashes away in fright. There are still technical problems, especially in regards to focus and motion. Technicolor was always traditionally a bit soft, but here digital programs were used to sharpen up the images as it was being “dimensionalized.” So while Dorothy may be in focus in the extreme foreground, characters moving in the middle ground tend to go soft very quickly. There were also some weird 3-D effects, for example, when Dorothy sings “Over the Rainbow,” she is leaning against a haystack which visually appears right in your face, but then there is another frame to the left that is flat against the screen. 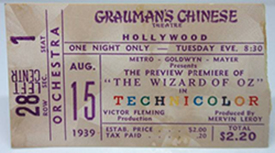 Warner Brothers, which not only has a financial stake in the Chinese, but also owns the rights, must have spent a fortune handling the conversion by company archivist Ned Price. The digital conversion utilized IMAX DMR® (Digital Re-Mastering) technology, coupled with IMAX’s customized theater geometry and powerful digital audio, which, according to the official Wizard website, “creates a unique environment that will make audiences feel as if they are in the movie.” I haven’t seen any figures on the actual cost, but according to a blog on 3-D conversion, another company in that business, In-Three (they handled Alice in Wonderland (2010)), “uses four to six hundred people while wearing 3D glasses 50 to 75 percent of the day, and costs about 80 to 100 thousand dollars per minute to do dimensionalization properly.”  I’m therefore estimating that this new version, which is also being hawked on Blu-ray and other formats cost in excess of $ 8 million to produce. 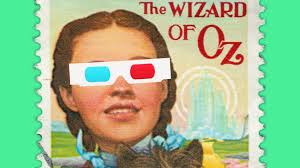 If the reactions of the many children in the audience are any indication, Warners will probably make that money back in the theatrical re-release, if not through their digital distribution. Seeing the film again, I realized that the film has always worked, whatever its form, because of its literate script, the songs, and the brilliant acting of its cast, who push the film almost to the level of parody, but not quite. If 3-D brings a new generation to the film, so be it.

One comment on “3-D Wizard of Oz at the Chinese”