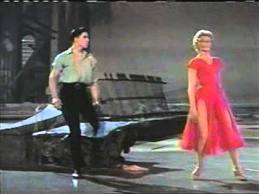 Because Sunday night at 9 pm, I get to see choreographer Rod Alexander‘s brilliant dance number, “The Birth of the Blues” from THE BEST THINGS IN LIFE ARE FREE (20th Century-Fox 1956), at CINECON Classic Film Festival — in a new 35mm print, splashed in CinemaScope across the Egyptian Theatre’s huge screen.

[Late breaking news: I will introduce the film tonight at CINECON highlighting the dance number for the audience.]

Sequence features Jacques d’Amboise, at turns tender and searing, dancing in truly majestic condition. The blonde vixen is Sheree North. Who knew this woman could dance so well? Her simple sultry dance walk, to my eye, gives Cyd Charisse and Leslie Caron a run for their money.

Alexander’s “Birth”sequence reflects the influence of Jack Cole … in 1955 Cole had just killed in a string of Fox Technicolor films (ON THE RIVIERA, GENTLEMEN PREFER BLONDES, THE I DON’T CARE GIRL) and was at the peak of his powers. He cast a huge shadow. “Birth” choreographer Rod Alexander was a Jack Cole dancer, participating in Cole’s films and night club act.

“Birth” has its own unique qualities: marvelous production design, superb story telling through movement, a fluid roving camera, and a sizzling but tasteful pas de deux for d’Amboise and North, both giving great performances. 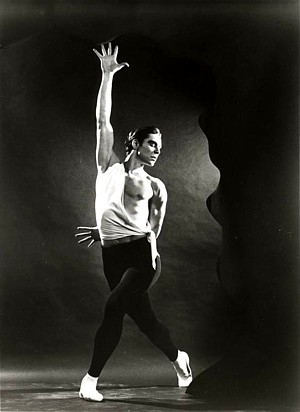 I talked with Jacques d’Amboise about the film, telling him that “The Birth of the Blues” is one of my favorite numbers. Jacques and choreographer Rod Alexander did the film because they had just collaborated on “Carousel.” Rod then vanished into thin air and Jacques returned to the New York City Ballet. The film is a bit of a mess with 3 leading men/characters; Sheree being allowed to dance for the first – and last – time and “Jazz Age” attempts to cash in on the success of “Singin’ in the Rain” with a “Black Bottom” number in which Jacques is merely a “fixture.”