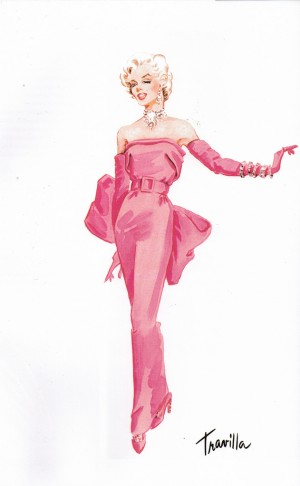 At right, Travilla‘s design for Marilyn’s iconic pink dress in “Diamonds are a Girl’s Best Friend” from GENTLEMEN PREFER BLONDES (1953) whose 60th anniversary we are honoring with a screening at the Academy’s “Oscars Outdoors” series Saturday August 3.

The classy pink dress, lined with felt, was a replacement design for an original, much less elegant costume.

Prior to the screening, I am giving a brief talk about Jack Cole’s contribution to the film.

I credit Cole, who was not just the number’s choreographer but its auteur, with influencing this costume.

Also on the program, George Chakiris, the magnificent Oscar-winning American dancer, part of the elite society of Academy Award winners.

As a young chorine, years before his blow-out performance as Bernardo in WEST SIDE STORY (1961), George danced behind Marilyn in this Mother of all Hollywood dance numbers.

The “Oscars Outdoors” screening of GENTLEMEN PREFER BLONDES is unfortunately sold out, but a standby line is a somewhat safe bet.

Hope to see you there!