Koehler on Cinema: “Between Us”

As Roman Polanski’s decidedly awkward “Carnage,” his 2011 adaptation of Yasmina Reza’s “God of Carnage” reminded, faithfully transferring plays to the screen more often than not fails. Dan Mirvish’s “Between Us,” his not-so-obeisant screen version of Joe Hortua’s play (commissioned but never produced by Costa Mesa-based South Coast Repertory), also deals with two married couples in mutual and separate crisis, and locking horns like crazy. Unlike “Carnage,” it turns theater into cinema. How? 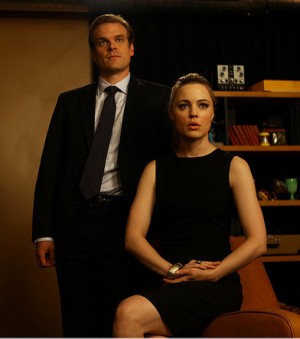 First, Mirvish, who co-wrote the screenplay with Hortua, had the bright idea to intercut the action of Hortua’s two separate acts and cinematically unify it. In the first act, well-heeled Joel (David Harbour) and Sharyl (Melissa George) invite college friends and couple Carlo (Taye Diggs) and Grace (Julia Stiles) to their Nebraska mansion, but can’t conceal their horrifically collapsing marriage much past the second glass of wine. The second act shifts forward a few years to Carlo’s and Grace’s midtown Manhattan apartment, where Joel and Sharyl pop in unannounced to apologize for their dreadful behavior. The fur flies again, for different reasons.

Mirvish’s decision to compact these sections and cut between them produces a feverish atmosphere that exactly re-creates what it’s like to be at a party where the hosts are coming unhinged. He pairs this choice with shooting his fine actors in widescreen—their faces placed toward the left and right edges of the frame, looking ready to fall off altogether—and refuses to fall into the trap of standard Hollywood-style match cutting during dialogue. His camera, and editing, are always on the move, so that watching and listening to “Between Us” brings back the best of Mike Nichols—particularly “Carnal Knowledge,” which Mirvish visually quotes—and the jangly talkiness of Tony Scott’s “True Romance.” The film is now at the wonderful Downtown Independent on Main; whether it continues past a one-week engagement is anyone’s guess.

Robert Koehler is a film critic for Film Comment, Cinema Scope and Cineaste and a contributor to Variety and Sight & Sound.