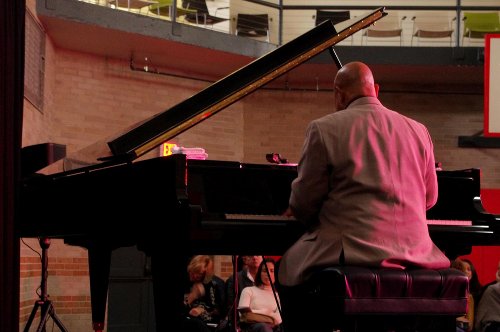 unleashed a magical solo piano recital in a boy’s gym.

It was the refurbished indoor basketball court of the 28th Street YMCA Building — a glorious community structure designed by esteemed African-American architect Paul Williams. The architect’s mission was to build in Los Angeles the city’s first club for “colored boys and young men.” All these years later, the lovingly restored Spanish colonial structure, now the centerpiece of a neighborhood revival, hosted a concert for the devotees of “Chamber Music in Historic Sites.” 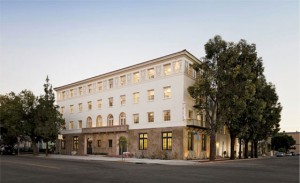 Replacing this clamor, a comprehensive program of accessible music delivered by Barron, who was installed like a king at a majestic Boesendorfer.

The jazz veteran’s playlist reached its apex with a gossamer dissection of  “The Very Thought of You.” Barron slowed the Ray Noble standard in its second chorus for slicing and dicing. His confident and gorgeous penetration of the simple tune was softened by a padded touch — dappled, feathery, refined.

Barron seemed to enjoy the casual setting for unrushed creativity.

“When I was a kid, we didn’t have a refrigerator. We had an icebox,” he told an audience that was primarily old enough to comprehend this.

“Every day the ice man, would deliver our ice. We had an upright piano in our living room. He would sit down and play. That was the first live music I ever heard. By Jimmy the iceman.”

Then, in honor of Jimmy, Barron laid down a growling blues — in the boy’s gym.