Paris arrives at L.A.’s doorstep for COL*COA @ the DGA 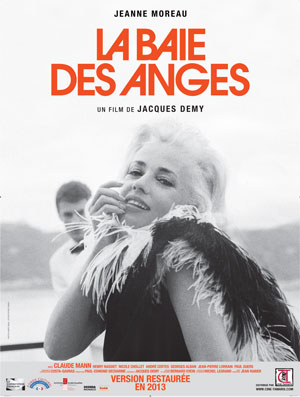 We love the annual French film festival, COL*COA [City of Lights * City of Angels]. It’s a deep plunge, every April, into the latest of French cinema and, increasingly, the schedule is studded with digitally restored classics.

The two viewing rooms at the Director’s Guild are among the loveliest in town; both are sparkling clean, feature humongous screens, no drinks or popcorn allowed. The festival attracts a crowd of cool international film buffs: a great audience, quiet, respectful, open-minded.

It’s French, so there’s food. There are wine-and-cheese receptions; if you attend certain talks they come as a bonus. If you’re a v.i.p., it qualifies you for pert salmon canapes and tiny little hamburgers.

We’re looking forward this Friday’s special screening of a 50th anniversary restoration of a classic, BAY OF ANGELS (La Baie des Anges) (1963), a film noir written and directed by Jacques Demy. The peerless Jeanne Moreau stars in a whirlagig of casinos, roulette wheels and the Cote d’Azure. What’s not to love? 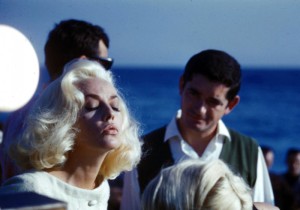 Directly following the screening, a panel discussion on “The World of Jacques Demy.” Leading the talk, film writer David Ehrenstein. Participants include: