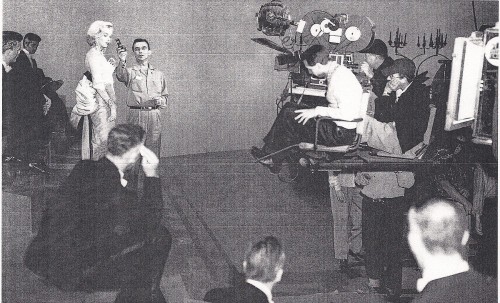 On the camera crane works Jack Cole (in white sweater, click photo for detail), directing “Diamonds are a Girl’s Best Friend,” exactly as he did for all four GENTLEMEN PREFER BLONDES (1953) dance numbers (Two Little Girls From Little Rock, Ain’t There Anyone Here for Love, When Love Goes Wrong, Diamonds Are A Girl’s Best Friend).

“Diamonds,” an infinitely unique dance number, was Cole’s concept; the former Denishawn dancer tarted up a song-and-dance number about a gold digger considerably from its Broadway treatment (in his own words, he “made it swing”). He influenced its design (human chandeliers), costume (pink dress by Travilla), musical arrangement (working with vocal coach Hal Schaefer, who just passed away) and, oh yes, he also choreographed it.

And he directed it.

When directors do all that soup-to-nuts stuff, aren’t they worshiped as auteurs?
The film’s directorial credit, big surprise, Howard Hawks did not share.

“Hawks was not even on the set,” testified Gwen Verdon, Cole’s rehearsal assistant on the film, remembering the circumstances of the filming of the dance numbers. This fact Jane Russell also also corroborated when I met her.

A fifth Cole number, an ornate Paris-themed confection with an Eiffel Tower backdrop, was cut from the movie. Cole regularly suffered this indignity working in Hollywood. 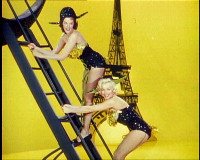 There is no “Gentlemen” without Jack Cole’s  contribution. On a minute-by-minute basis, if you add it up, you really have to ponder who directed GPB. But never mind how long were the sequences, just consider the inverse. Think about GPB without its song-and-dance numbers. There’s no movie!

I hunted down this precious photo, the version posted above is a scan of a xerox. Thus the poor quality.

p.s. George Chakiris on view in the background.