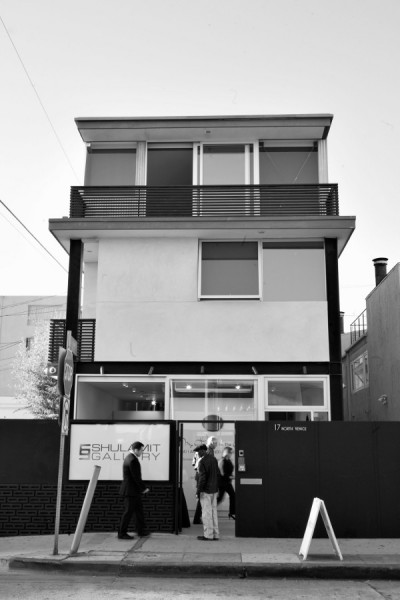 Two weeks after a bustling opening party launched a new house of art at Venice Beach, we revisited the multi-floored Shulamit Gallery on a grey-skied late-November afternoon. The smart, post-modern shoebox structure wedges neatly into a row of buildings that marks the end of Venice Boulevard.

At this location, arguably the western-most point of sprawling Los Angeles (ten more steps puts you on a sandy beach), we enjoyed the opening show, “My Heart Is in the East, and I Am at the Ends of the West.” Our personal guide was the gallery’s founder and its devoted curator, Shulamit Nazarian.

With great care and the occasional burst of passion, Nazarian, raven-haired, petite, and porting a pair of dark-rimmed spectacles, proffered an exhaustive gallery tour.

“My Heart Is in the East,” which runs through the holiday season, explores the unique issues pertaining to the Iranian Jews, one of the world’s oldest Jewish communities. Viewed through the creativity of five artists, Farid Kia, Laura Merage, Soraya Sarah Nazarian and Jessica Shokrian, the show examines themes of exile, home, religious and national identity. Coming a full generation after Iran’s Islamic Revolution of 1979, the gallery stands as a strong bastion, a place for study, dialogue and self assertion for a community that suffered extreme suppression at home and then teetered in impermanence and flight. Iranian Jews now figure prominently in Los Angeles among other diaspora destinations. Nazarian clearly believes the time is right to look back … and then ahead.

“What I care about is who we were … and where we want to go,” she says.

A favorite artist of Nazarian’s (she herself is an active collector and may safely be labeled a feminist) is the Denver-based multimedia artist and philanthropist Laura Merage. Merage’s works on view in Venice employ textile and photography.

Indicating Merage’s long tapestries that hang from the gallery ceiling, Nazarian notes, “It’s about what she reveals and doesn’t reveal. Pain and beauty come together; there’s frustration on view. There’s also sexuality.”

Merage, who was born in Tehran, “only suggests what is covered; there are no body parts in view. There is only the face,” says Nazarian. “And the fabric is woven in gold thread, a reminder of Iranian ceremonial culture.”

Farid Kia’s cracked-skin facial portraits give form to the surfacing of the repressed stories of the Iranian Jews. Says Nazarian, “Farid had no formal education in art. He’s self taught. He’s fascinated by skin and aging.”

Jessica Shokrian’s art explores the notion of duel identity. Nazarian says, “The artist has an American mother and an Iranian father. Her work toys with notions of superficiality and conformity and wanting to be like everyone else.”

Soraya Sarah Nazarian’s sculptures “show [the artist’s] strength,” notes the sculptor’s art dealer who is also her daughter. “There’s a strong masculine element yet the presence of the feminine as well. I find strength, yet softness.”

Over a snack of Persian tea and dried fruits served in the gallery’s immaculate modern kitchen, Nazarian, the mother of three and a resident of Los Angeles since her family relocated from Iran in 1978, speaks in a subdued voice. 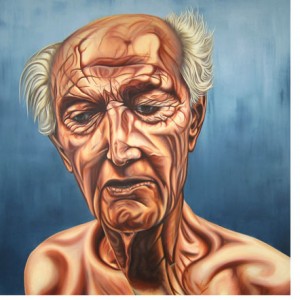 “I had an epiphany five years ago,” she says. “I wanted to have a space where I could bring stories of Iranian Jews. So I could help my community to have some clarity.

“The voice of the Jewish artist – and the Israeli artist – has been so suppressed in the Arab world. It has been especially hard for Iranian-Jewish artists; there has been harsh treatment in Iran.

“We are a suppressed and looked-down-upon group who could never enjoy who we are. It’s a moment that we have our opportunity now. We can look back as a community at the richness of any moment in time. We find amazing powerful elements.

“I’m interested in the language of today. It’s powerful, out of the box, and pushing forward. It’s very important that we can talk amongst ourselves in a transparent open way. And then I want us to talk to the world at large.” 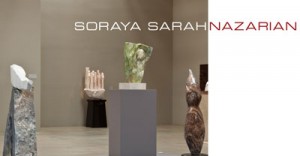 The exhibition also includes several historic pieces, which were displayed in Iranian homes and given as gifts to foreign dignitaries before the Revolution. They are on loan from the collection of Iranian silversmith Ben Mayeri (1914-2003).

The gallery has a strategic partnership with Beit Hatfutsot in Israel. The current show is an official satellite exhibition of the UCLA Fowler Museum‘s Light and Shadows: The Story of Iranian Jews.

My Heart Is in the East, and I Am at the Ends of the West | Shulamit Gallery, Venice | thru Jan 5