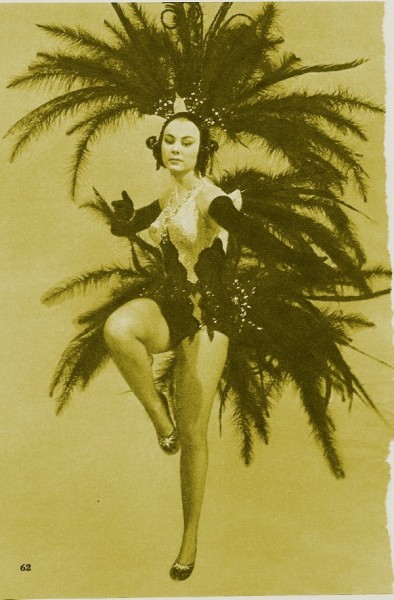 I am very pleased to announce my participation in a truly wonderful celebration of dance on film at the Billy Wilder Theater In Westwood on Saturday August 4, 2012. It’s sponsored by the UCLA Film & Television Archive.

On that night, as a community, we will view the rare and out-of-circulation Twentieth Century Fox movie musical “The I Don’t Care Girl” (1953) starring the then 20-year-old starlet Mitzi Gaynor. It’s a miracle that UCLA has a print of this Fox bio-pic about the vaudeville hottie, Eva Tanguay.

Mitzi will be at the Hammer for post-screening discussion. Also participating will be Larry Billman, Founder of the Academy of Dance on Film, and myself. Shannon Kelley, Director of Public Programs for the Archive will moderate the evening.

Among the unsung heroes of Hollywood history, choreographers are often overlooked by aficionados of both dance and film. Jack Cole, an innovator of jazz dancing (and one-time dance instructor at UCLA), presents a fascinating case. Neglected in most discussions of dance on film, Cole introduced radically modern ideas and forms to a sphere often treated as merely decorative, choreographing for both bodies and cameras. He infused the dance profiles of such screen personalities as Betty Grable, Mitzi Gaynor and Marilyn Monroe with unprecedented high style and graphic beauty. Tonight’s screening and discussion represent an appreciation of Cole’s contributions to dance on film, and a consideration of the screen choreographer’s craft.

“The I Don’t Care Girl” is a cult classic not for the film itself but for three superlative dance sequences embedded within it: “I Don’t Care,” “Beale Street” and “The Johnson Rag.” The evening also matters because Jack Cole was a UCLA dance instructor at the time of his death in 1974. Please join us for this tremendous, way-fun event.

The UCLA event will precede my TCM guest-host appearance, “Choreography by Jack Cole,” a four-film Jack Cole homage that will air on Turner Classic Movies on September 10, 2012. Let’s call it a great warm-up!

7 thoughts on “Jack Cole’s magic for Mitzi Gaynor on view in rare screening of “The I Don’t Care Girl” by UCLA Film & Television Archive August 4. Gaynor to appear in-person.”