The highlight of a dance-filled week in New York was seeing the Martha Graham Dance Company perform all three sections of Graham’s powerful anti-war screed, “Chronicle,” made in 1936. 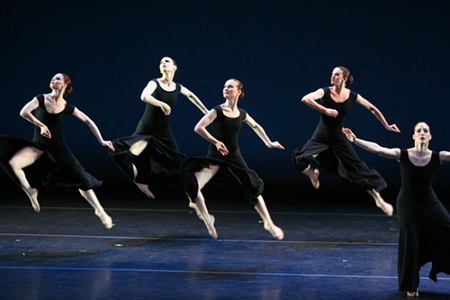 Part II of “Chronicle,” the reconstituted group dance, “Steps in the Street,” has been in circulation for a few years. But it was my first look at parts one (a solo) and three, in which a wildly determined group of barefooted women yank and twist their torsos while circling ’round a solo figure dressed in white.

How do you like your choreography? Do you like clear-cut design in space? Unrepressed, even grueling, emotion? A dramatic arc you can follow? The unspeakable and the difficult in the human experience rendered poetic? High-octane physicality? Political allusions? Then “Chronicle” is your dance.

The Joyce program also gave me my first viewing of “Every Soul is a Circus,” a dream-ballet in which a woman steps outside herself to examine her relationships — in Graham’s case, with her husband Erick Hawkins. This practically mythic, yet very approachable work of art takes place in a smart minimalist set with vivid colors that evoke the circus metaphor. I found it sparkling and just great. I related to it. So did, apparently, an audience full of children at the Joyce, as I attended the theater’s “family matinee.” Either those kids drank the Greenwich Village Kool-aid that makes them arty just by dint of living in New York, or Graham is an even greater choreographer than we really understand. The kids lapped it up, please pardon the cliche but you could hear a pin drop.

Martha Graham’s choreography needs to be seen to be believed. The Joyce Theater season has just closed, and the Graham company website does not indicate further bookings. This work must survive and be seen by young people. That’s why I am supporting the Martha Graham Dance Company with a contribution here.