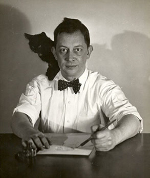 Opening this coming Saturday night — the first gallery exhibition since 1980 of watercolor paintings by John Norment, a prominent cartoonist for The New Yorker magazine.

Over 40 unseen watercolors by the cartoonist and joke book editor/illustrator will be on view in the show, which is co-produced by New Puppy Gallery and Planet Glass.

Norment was a highly accomplished cartoonist, publishing drawings in the New York Times, The New Yorker and a myriad other newspapers and magazines.

He began his cartooning career in Chicago after attending the Art Institute and the Academy of Fine Arts there.

After duty as a photographer during WWII, he settled in New York before retiring to Westport, Connecticut. He died in 1988.

His oeuvre includes two covers for The New Yorker, work on more than a dozen joke books from the 50s to the 70s and this rarely seen foray into fine art.

The fine-art watercolors in the New Puppy Show were discovered by the artist’s niece after his death in 1988. Most are abstracts featuring vivid Mid-Century geometric designs; each is heavily influenced by cartooning techniques.

A few are more illustrative, including two cover submissions to The New Yorker.