Between “Pina” and a hard place 4

Heavy-hitting filmmakers are turning their cameras on dance and it’s an honor. It’s also a puzzlement, to the dance world. It surprises us. We thought that the only folk attending dance performances were fellow dancers, parents, and dance critics. But clearly we were wrong. Other artists – filmmakers – love dance too.

The best parts, the brilliant bits, of “Pina,” may emanate not from the choreographer but from the filmmaker. Wenders removes Bausch’s work from the theater, and places it in the startlingly tidy German countryside (everything in this film is immaculate). A dancer frolics in the grass, toying with her colorful chiffon skirt. A duet transpires on a stunning glass-walled outdoor platform. Back in the city, the man and woman twirl at street level, beneath an elevated commuter rail track. Also gripping are the sequences shot in the mills and factories of Wuppertal, the central German town where the dance company is based. A male dancer, flopped onto the platform of what looks like a steel mill, moves his limbs like a broken puppet. Industrial supply cars glide silently behind him. What a vision. There’s an extremely wry sequence — gee the whole thing is so severe you dare not laugh out loud — clowning in a tram car. This material is amazing to watch, memorable, transcendental. Bravo, Wim Wenders. [review continues below photo] 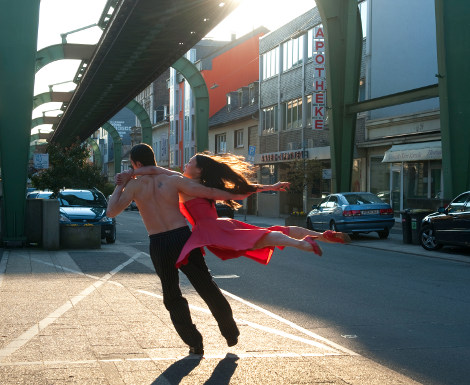 Bausch is admittedly not my favorite dance maker. What on earth is she trying to say? Even if I got part of it, it would be acceptable. I see that she’s gathered a colorful tribe, and employs a theatrical, plastic visage to make it all human. But I don’t recognize the people. The look doesn’t help me — unkempt hair, loose breasts, grandma sack-style dresses, lingerie-slips, ball gowns worn by bohemians. The male contingent is even weirder, in retro suits with bare feet. The staring, hanging, clinging, clawing, dropping and, above all, the suffering – to what end? It’s strikes me as very sad. The old-tyme music distracts, excuse me but I don’t care to reminisce on Germany in the 1930s. I fail to meld as an audience member with this artist, perhaps my inadequacy.

The studio and theater scenes, delivered in bits and pieces, are grounded in Bausch’s signature work, the unbearably opaque “Cafe Muller,” which has not aged well. Dancers sliding down walls, overturning chairs, the purposeful ugliness feels irrelevant.

So what’s at the heart of this movie? Not a documentary, it provides no artistic context. The film assumes Pina Bausch matters – a lot. I was waiting to hear from the grizzled German dance critic, a chain-smoking “Sprockets” guy, who’s devoted a lot of time thinking deeply about Bausch’s art. But he’s not in the picture. Instead, the precious explanatory moments are allocated to sound bites by infatuated dancers, e.g., “Pina told me ‘be more crazy’ …” Touching because the grief-stricken dancers memorialize Bausch so soon after her death, nonetheless, these commentaries are not of real use to civilians.

Does “Pina” deepen our connection to a mystery-plagued art form? That’s what I care about. Dance needs fewer Martians and more Earthlings; less obfuscation, more clarity. We need humane, direct communication with audiences. At the screening I attended, the response was muted. I wondered how many new dance friends “Pina” had made.

4 thoughts on “Between “Pina” and a hard place”