The Greatest at his best, courtesy of photographer Michael Brennan

We enjoyed seeing art photos of the sweaty Muhammad Ali muss up the otherwise pristine Design Within Reach’s furniture-exhibition halls. The sports-and-boxing theme was an odd fit for the tony Beverly Boulevard retailer, but a good crowd milling ’round the rooms made it all work. Even a glimpse of Ali gives everyone a little more human courage. 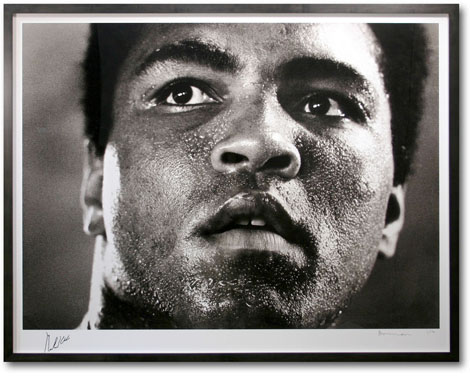 The event celebrated the induction of Michael Brennan‘s iconic sports photograph, his “1977” portrait of Muhammad Ali, into the National Portrait Gallery at the Smithsonian in Washington D.C. The British-born photographer hung out at Ali’s training camp in Deer Lake, Pennsylvania, 34 years ago, when the heavyweight champion was preparing for his Earnie Shavers bout at Madison Square Garden in 1977.

According to Max Emanuel Donner writing in the L.A. Sports Business Examiner,

Brennan completed over half the portfolio while covering his own expenses before finding publishers who would pay for them. He is now being handsomely rewarded, since he owns the copyrights to these museum pieces rather than the magazines who licensed the images from him. Brennan has also observed how the ubiquity of digital photography has lowered standards across the board so that classic images from the golden age of sports photography are valued even more highly by the market. This exhibition will provide an important test; the prints for sale are being sold in “very limited editions” of ten, each signed by Michael Brennan himself.

Chris Forney, proprietor of Artworks Gallery, is behind the show. Forney just transferred the works for display at his Pasadena gallery to coincide with Ali’s 70th birthday celebration on January 17, 2012.