Fare-thee-well, Laemmle Sunset Five, and thanks for the memory

A happy announcement couched in some sad news: Laemmle Theatres will open a new seven-screen complex in North Hollywood, alas, concurrent to the closure of Sunset 5 after almost 20 years of operation.

From the Laemmle folk, 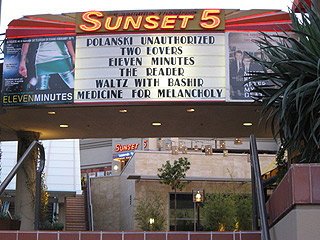 It is with deep regret that we announce that Laemmle will be ending its operation of the Sunset 5 Theatre at the end of November. A mainstay of the Los Angeles exhibition scene since its opening in 1992, the Sunset 5, was vitally important in launching a wave of new directors. Filmmakers such as Todd Haynes (SAFE), Lisa Cholodenko (HIGH ART), Doug Liman (SWINGERS), Catherine Hardwicke (THIRTEEN), Bryan Singer (THE USUAL SUSPECTS), Todd Solondz (WELCOME TO THE DOLLHOUSE), and Bill Condon (GODS & MONSTERS) saw their films premiere to sell-out crowds at the Sunset.

Roger Christensen, the original manager of the Sunset 5, had this this to say about the theater in its heyday: “It was a heated mix of eager young talents, amusing indie hucksters and hangers-on, and a passionate, razor sharp cinephile audience.”

Roger fails to mention that his presence at the Sunset Five’s door, dropping marvelous, caustic one-line film reviews, was another key element of the scene.

This was a multiplex where you could show up not even knowing what was on, because … that’s why God invented Roger. He’d tell you. First, he’d blurt out his take. But then he’d scrupulously inform you what customers thought. He knew this because when you exited the movie, you had to report. He tracked it all.

So, what’s up with the new project? According to the announcement:  Located at 5240 Lankershim Boulevard, The Laemmle NoHo 7 will feature digital projection in all auditoriums with full stadium seating in the two largest auditoriums and modified stadium seating in the smaller halls. All auditoriums will have high-backed leatherette rocker seats with extra-wide row spacing. Although the initial slate of films still has to be determined, it is anticipated that the theatre will program a blend of adult-appeal Hollywood films combined with Laemmle’s signature foreign language and American independent fare.

Laemmle is operator, developer and property owner at the NoHo 7, according to company President Greg Laemmle, a new paradigm for the privately held company.