Greetings from Wuhan, one of China’s “four furnaces.”

It’s a hot one today, blazingly sticky and humid; for every particle of air, an equivalent particle of dirt.

The dancers already had class and rehearsal and are hanging out, resting, before tonight’s show.

Wuhan is a big old-industry town in the heartland of China, a bastion of iron and steel industry, sometimes called the Pittsburgh of China. I have even called it that. But that was before I visited it. Proud of Pittsburgh’s charms, I won’t be saying that anymore.

We are staying in a local hotel and it’s a challenge. It’s the challenge I signed on for — because my China expatriate days in the ’80s and ’90s were spent in the relative comfort of the five-star foreigner experience. I never slept in local hotel rooms; I never ate three locally-cooked Chinese meals a day; I never hung around in the backstage of a Chinese theater. Every theater we visit we have to direct the re-taping of the Marley floor, mopping and washing it just so the dancers don’t get infected, their lungs full of dust and bacteria when they dance. 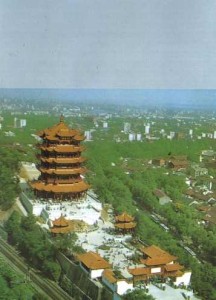 We have had problems getting a piano at every performance venue, to the great distress of our jazz band’s pianist. It’s not that China lacks pianos. The opposite. China has one of the frothiest markets for pianos in the world, with every precious single-child a burgeoning musical genius. It’s because getting anything done here requires a boatload of bureaucracy manipulation that our Chinese hosts simply failed to manage before our arrival — anywhere. We have had to beg borrow and steal almost everything needed to put on our show.

At SIAS University, our first residency, the band wandered the campus asking about instruments. They bumped into a foreign instructor who got them hooked up with stand-up bass, drums, and saxophone — but the keyboard has been a problem.

After the pitilessly long day most Chinese put in, there’s not a comfy bed waiting at day’s end. The opposite. (This is a running theme… ) Chinese like hard beds, also known as a hard board. One of our guys plonked down on his bed when he got into the room and hurt his arse so much he could barely walk. Another told me that he woke up in the morning wondering, “Did I just sleep on the floor?” But mostly we are so wiped out that we zonk out.

The dancers also zonk out on the bus. They got trained on bus zzz’ing by driving in snowstorms during last winter’s Russian tour  — for sometimes up to twenty hours.

Whatever the hardships, we are having a wonderful time. The dancers are incredible troupers. No matter what China brings their way, they shake their head and insist, “Russia was way worse.”

From Wuhan, not the Pittsburgh of China,