Where the heck are we in Henan Province? We’re in Xinyang. 3 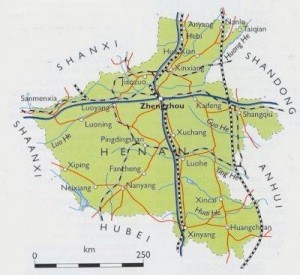 At the close of Day 18 of a 25-day performance tour through four provinces of China, we find ourselves in a netherworld of time and space. No one on the bus can remember what day of the week it is — or where we are.

The daily drill goes like this: In the morning, after Chinese breakfast, we pile bags and bodies onto the bus, motor to another city just in time for Chinese lunch. We go to the theater; there, the dancers take class and rehearse, or if it’s late, they just warm up. There’s a tech run-through with sound checks for the band. 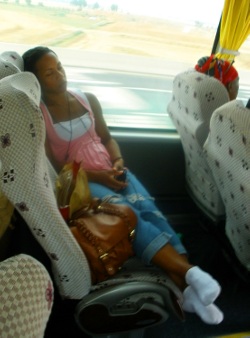 At 8pm there’s a performance. Clap clap clap clap; the local people clamor on stage to pose for snapshots with the foreigners (that would be us). Everyone files back on the bus to catch a late-night dinner at the hotel (Chinese food, round three) and then lights out.

But it’s admittedly disorienting. This feeling led me to Google a map (click on it, above, for detail) to figure out where the heck we are.

The CCP-run hotel (a large local management chain, Chinese Communist Party) we are staying at right now blocks many intenet addresses, so navigating the Web is no easy feat. For example, yesterday I Googled “jet li shaolin temple” — it was blocked.

From the map above, I see we’re at the province’s tail end, in Xinyang city, in a very poor region of China.

Last night, we were in Luohe; before that, Xuchang, Kaifeng, and in the capital city of Zhengzhou.

3 thoughts on “Where the heck are we in Henan Province? We’re in Xinyang.”