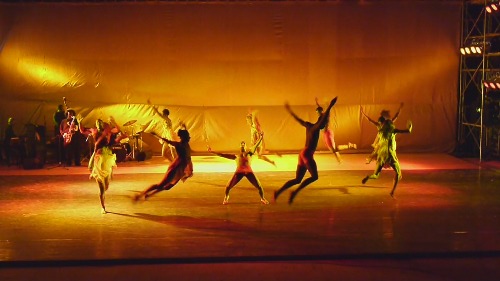 There was no better place to be on earth  — not New York, not Paris, not London, nor Beijing.

All of the action tonight was at a Roman-style outdoor amphitheater one hour outside Zhengzhou, PRC. That’s the capitol city of Henan Province (pop: 94 million). There, at SIAS University, the 13 dancers of Lula Washington Dance Theatre kicked it in two majestic shows — the first to a house numbering 2,400 and the second, tonight, for approximately 3,000 Chinese college students and their families visiting on a graduation weekend.

The audience was chock-a-block; a dense wall of faces. Rows of them. You could witness the homogeneity of the Chinese nation. The hard-driving dance troupe more than delivered, earning the house’s rapt attention. 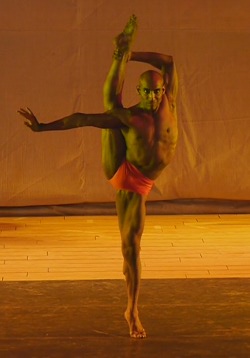 The Chinese, as audience, are tough customers. They chit chat, nonstop, through everything. So to command dead silence, as happened on night one when Ramon Thielen killed in his highly technical solo, “Healers,” and then, on night two, during an acrobatic pas de deux between Lynet Shigg and Micah Moch in “Love is …” set to great music by Sigur Ros —  well, that’s a tremendous litmus test for performers.

It’s a family affair with the Washingtons. Tamica Washington-Miller, second generation, is a high caliber dancer with a strong penchant for drama. A dance-world veteran, and film-and-theater-world aspirant, the beautiful Washington-Miller not only masters African and contemporary black vernacular dance, but has a rare gift of talking with her body, most effectively displayed in her mother’s masterwork, “We Wore the Mask.” 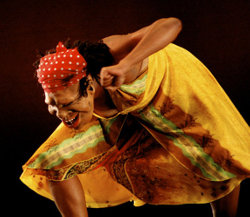 “Mask”‘s dance-drama relates to a deep, historic concept in Chinese culture — that of ‘having face’ and, importantly, not ‘losing face’– a driving normative in Chinese social behavior.

So when Washington-Miller springs on the stage donning a grotesque mask, a frisson runs through the audience. It hearkens not only to the masks of Chinese opera, but it speaks profoundly to a culture that lived bereft of material accoutrements, and survived by managing with the ‘face’ they were born to inhabit. Face is heavy in China. Bingo, Lula Washington, this piece scored a Chinese bull’s eye.

After Washington-Miller’s gripping solo, she’s joined by the company — the men, in black tees and blue jeans, the women, bare-legged, in scarf dresses; from there, the dance blasts off. Marcus Miller accompanies on drums, anticipating the dancers’ actions; a one-man orchestra of funky percussion impelling a cast of seven.

How many American dance companies offer live art happenings like this on stage? Way too few. 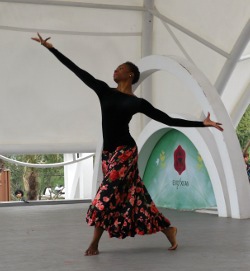 Washington’s troupe possesses spectacular physical and emotive powers. As a choreographer she encourages self-expression; and this particular group (she’s had many over the years) takes the entree.

Washington’s male line-up —  the astonishingly lithe and capable Michael Battle, who never disappoints; Dwayne Brown, long-limbed, limber, and handsome; Micah Moch, dancing so deeply he almost dances inside out, and Christopher Nolen who juxtaposes weightedness with unexpected fluidity — cannot match the great Alvin Ailey male corps per se. But they out shine Ailey guys with their transparent love of dance, funkiness and individuality. They’re not about perfection. They are about manliness, and male artistry. They form a quartet to be reckoned with.

Washington’s women constitute a group love-in. One prettier than the next, the queen bee of the swarm this evening was the technically proficient Haniyyah Tahirah, her beautiful ballet placement begetting a big-bird arabesque. Tahirah excels in the Washington perennial, “Angelitos Negros,” a solo study by Donald McKayle about fierce Latina pride that’s full of technical risk taking. 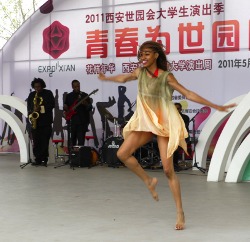 Then there is Lynette Shigg, beautifully trained with a ripped-for-action body ready to exceed every limit; she dances like she’s looking for trouble. Queala Clancy: if only gangly gazelles were reborn as elegant, effervescent performers. Then the firey April Wilkins, like Washington-Miller a solid, even great, dancer-actress. Spunky Mary Runkle, young, girlish, tantalized the Chinese audience. But blondes have more fun in China …

This pitiless crew had not only a dance critic eating out of their hand; five thousand Chinese also succumbed to their charms, responding to their enduring hard work. Lula Washington Dance Theater leaves behind this huge cluster of Zhengzhou admirers. One of them, highly excited, asked me in Mandarin, “Lu-la Huaxundun zai Meiguo hen you ming ma?” i.e., Is Lula Washington terribly famous in America?

Well, I answered, somewhat. But let’s just say “not enough.”