In China, with Lula 1 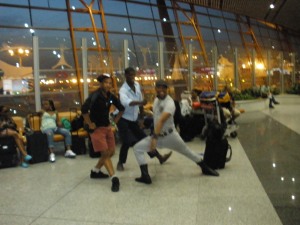 At right, the irrepressible dancers of Lula Washington Dance Theatre, who open a 25-day tour of China, noodle around the Air China terminal at Beijing Airport prior to flying to Xi’an, the capital city of Sha’anxi province.

The tour’s sponsors include the U.S. Department of State and SAIS University of Henan Province.

The troupe and its four-piece jazz combo, smokin’ under drummer Marcus Miller’s leadership, enjoyed a hugely successful opening performance (of two) in Xi’an.

The Los Angeles-based African-American artists boogied before a Sha’anxi Province audience of 1,000, who clustered into an outdoor amphitheater on the mammoth grounds of a local exhibition center. 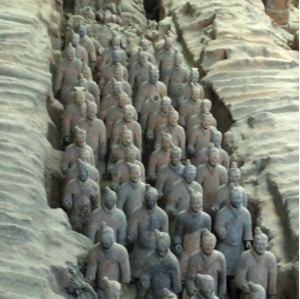 In China, it takes about 15 minutes to gather that many people. The response ranged from muted fascination to a discernible pleasure for Washington’s choreographic homage to Chinese culture, “Global Village,” with music by Fela.

For the past 3,000 years, Xi’an, an ancient Qin Dynasty capital of China, has been home to an underground militia of 8,000 terracotta foot soldiers.

For the past 24 hours, adding to the body count with formidable force: Lula Washington’s Gang of Thirteen.