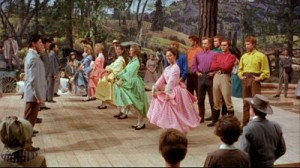 Last night at TCM Fest: my first big-screen viewing of Stanley Donen’s “Seven Brides for Seven Brothers.” Especially fun since Jacques d’Amboise was just in Los Angeles on a book talk. He spoke quite a bit about making the film.

D’Amboise was very young when he appeared in this movie and he was kept quiet ostensibly to mum up his huge Bronx accent. He’s surrounded by dance giants, among them Marc Platt and Tommy Rall, the latter whom Academy of Dance on Film founder, Larry Billman, calls, “the best dancer — ever.”

D’Amboise tells a funny story from the “Seven Brides” set. Rall stands and with no warmup or preparation whatsoever, rips off multiple triple tours en l’air. D’Amboise, half laughing, admits that to this day, he has no clue why Rall did it. Boredom, d’Amboise conjectures. Dancers spend gobs of time sitting around waiting when making movies.

In “Seven Brides,” it’s the tall lanky Jack Cole dancer, Matt Mattox, who captures my eye. What a dancer. He has that hard-core Jack Cole iron gut. He’s still around, in France. A beautiful dancer who went on to choreograph and be a seminal jazz-dance instructor with a clearcut methodology.

Filmed in CinemaScope, Color by Ansco

3 thoughts on “My favorite brother of seven, Matt Mattox”