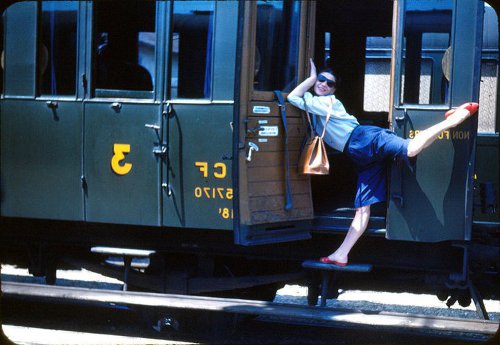 A characteristic shot of the inimitable New York City Ballet ballerina Melissa Hayden (1923-2006), nee Mildred Herman, a nice Canadian Jewish girl (who knew?) who wanted to be a champion swimmer, or so we learned from Milly’s habitual partner, Jacques d’Amboise, at an ALOUD book talk last week. D’Amboise reveled in stories about the extroverted, vitamin-popping ballerina. Now bear in mind that d’Amboise referred to himself as a “Washington Heights gangster kid,” and so you catch the tone of this wonderful evening at Central Library.

They broke the mold when they made the bubbly, effervescent Jacques d’Amboise. We watched in amazement as this guy charmed the knickers off a roomful of female fans with hilarious stories told in his great New Yawk accent.

One person he raved about was Rod Alexander, the choreographer of the filmed version of “Carousel” in which d’Amboise appeared — yet another lost name of Hollywood choreography.

Well, guess who recently published the most fabulous photo of Rod Alexander along with his mentor, Jack Cole, and George Martin in “The Gladiators”?

D’Amboise famously danced in Stanley Donen’s “Seven Brides for Seven Brothers,” (chor: Michael Kidd) in which everyone appeared. Of his dance-film career he said: “I was beat up, bruised, and exhausted. I loved every movie I did at the time I did it. ”