What a guy! Ehrich Weiss, a.k.a. Harry Houdini 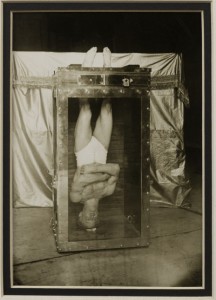 The absolutely fabulous “Houdini: Art and Magic,” which opens tomorrow at the Skirball Center along with its equally wonderful companion show, “Masters of Illusion, Jewish Magicians of the Golden Age,” injects fun, mystery and gamesmanship into the ether — right when we need it most.

Jewish guys dressed in turbans and tuxedos, waving wands, and swishing capes — in Houdini’s case, stripping to his skivvies, weighting down with locks and chains, and jumping off a bridge — seems like a purdy danged good idea to our dulled imaginations.

There is something for everyone in the saga of Harry Houdini, the Budapest-born, Appleton, Wisconsin-raised obsessed son of a Rabbi. A Jew with a cockamamie Italian-sounding name, Houdini’s tricks, challenges, exhibitions and escapades drew throngs of new urbanites — we’re talking immigrants — into the streets and set the tone for the chutzpah of the twentieth century. 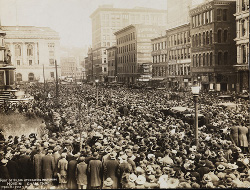 Later, man wouldn’t merely do the impossible — escape from a strait jacket hanging upside down by his ankles. He would defy nature and gravity, with autos, trains and airplanes; he would walk on the moon; he would harness the life force itself in a destructive bomb.

Was Houdini visionary? con man? genius? exhibitionist? superman? or … a fake. That was the question.

You decide for yourself. One thing: you’re not allowed to ask, “How did he do that?”

Houdini: Art and Magic and Masters of Illusion, Jewish Magicians of the Golden Age | Skirball Cultural Center | thru Sept 4, 2011