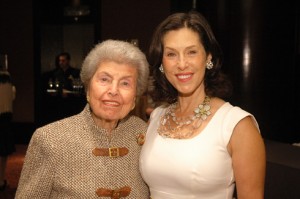 We’re very proud of Liz Hirsch, the longtime supporter of dance in Los Angeles, who is being honored along with her mother, Mimi Levitt, by the Joyce Theater Foundation on April 11.

Liz, a classy gadabout, always superbly dressed and full of fire, was a key supporter of the Joffrey Ballet when it was resident ballet troupe of the Los Angeles Music Center. She then became a founding board member of Center Dance Arts, a cluster of L.A. dance patrons ready to open their pocketbooks in support of the presentation of international caliber companies at the Music Center. 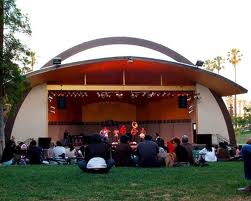 But lately, Liz picked up the ball on a family-begun project, realized through the Mortimer Levitt Foundation: a national network of community-oriented outdoor amphitheaters, the Levitt Pavilions. Expanding on this wonderful program now occupies Liz full time.

There are currently ten such bandshell-style theaters, either operating or in development, presenting fifty dance and music concerts every summer, all free of charge. Most are located in underutilized public parks, including the once-elegant grounds of McArthur Park, situated right outside downtown Los Angeles. Into this park, which has seen better days, marched Liz Hirsch.

To attend a robustly presented free concert in McArthur Park, at night, with the L.A. downtown skyline in the background, feels nothing short of miraculous. It makes you understand that Liz is a outstanding arts hero, and worthy of recognition.

In a statement, Liz Hirsch says, “I’m a connector, passionate about three things: dance, music, and people. I bring people together to enrich worthy causes and to make the world a better place.

“The Levitt Pavilions program transforms communities, and it’s a smart business model; with less than a million dollars you are taking underutilized public parks and converting them into community treasures. They become a place where people want to bring their most valuable asset, their children.”

Thank you, Liz Hirsch, and congratulations.