Two terrific Tennessee Williams shows are on right now, and what a lovely way to gain exposure to our great southern playwright, born March 26, 1911, who would turn one hundred years old this Saturday had he not choked on the cap of his eyedrop squeezer in 1981. But that’s a story for another time. He was in a good New York hotel, at least, when he died. The Élysée.

And to celebrate his centenary, one of the presenters, the Fountain Theatre, home to a

marvelously spirited production of A House Not Meant to Stand, will serve birthday cake and mint julips after the performance to toast Tennessee.

The Fountain will present a video montage about Williams, and also create a new video using birthday wishes and testimonials offered by actors and audience. 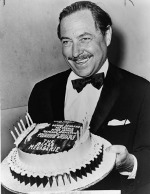 Audience members are encouraged to dress as their favorite Williams character. That’s an invitation people in Los Angeles take seriously. A throng of Blanche DuBois will surely flock to the theater, several of whom, I believe, live in my apartment tower.

The Fountain’s production of A House Not Meant to Stand marks the first time that audiences on the West Coast have been able to see Williams’ final play, written the year before he died. I saw it and liked it very much.

Also highly recommended: The Eccentricities of a Nightingale, Tennessee’s tone poem, a rich blend of language, character, and emotion, now on at A Noise Within in Glendale. An absolutely beautiful experience to watch this show. Go.