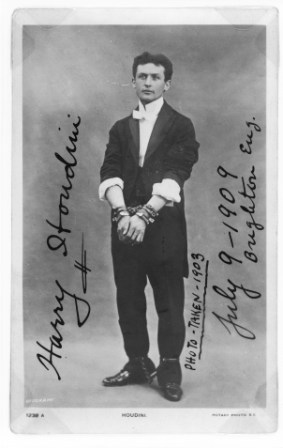 Houdini: Art and Magic, coming soon to the Skirball Cultural Center, traces magician and escape artist Harry Houdini’s evolution from fledgling circus performer in the 1890s, to stage magician at the turn of the twentieth century, to star of stage and film.

Works by contemporary artists, Matthew Barney, Jane Hammond, Vik Muniz, Deborah Oropallo, Raymond Pettibon, Allen Ruppersberg, and Christopher Wool are also included in the show. That’s meant to illustrate the influence of Houdini’s physical audacity and celebrity, his magic props and illusionist effects, and the themes of metamorphosis and escape.

According to the press materials, Houdini (1874-1926) , born Ehrich Weiss in Budapest, was the son of a rabbi who immigrated with his family to Appleton, Wisconsin, in 1878. Like, who knew that? I already learned something. Now, for some tricks!

In conjunction with “Houdini: Art and Magic,” the Skirball  has organized an original companion exhibition, Masters of Illusion: Jewish Magicians of the Golden Age, which spotlights magicians of Europe and the U.S. I hope they spotlight whoever scarfs down Elijah’s cup of Manischewitz at the Seder table.