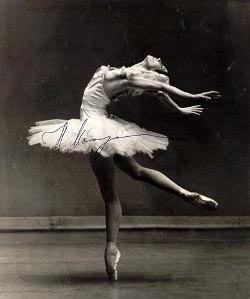 It was a blunder. I thought I was calling her assistant to arrange an interview. Instead, I dialed the New York number and Natalia Makarova herself answered the phone. Frozen in fear, I tried to recover gracefully and still get an interview. She wasn’t feeling well and demurred. Later that day, a statement concerning her defection popped in my email in-box (below). Initially I thought it was pablum, but in re-reading it, I find it moving.

2010 is the forty-year anniversary of Makarova’s defection, in London, to the West. She intended to dance with the Royal Ballet, but an offer was not forthcoming. American Ballet Theatre, instead, reached out to her and she was soon in New York learning Tudor ballets to which she had great affinity.

In our brief conversation I was able to tell her that I saw her every performance in the fall/winter 1972 season of ABT at the Kennedy Center. I was a freshman at George Washington University — and a part-time usher at the Kennedy Center. Drinking in those great ABT performances from the Opera House’s balcony stair steps, dressed in my red polyester usher jacket, I couldn’t have been happier. I loved it. But I hated school, and dropped out that December. I only wanted to dance … inspired by Makarova!

NATALIA MAKAROVA’s statement on her defection

“When I made the decision to take the drastic step of staying in the West in 1970, I knew the step was irrevocable. But, there was no other way in which I, as an artist, driven by a profound inner need and sense of dedication to my profession and knowing that life as a ballerina is not as long as other professions in the arts. I felt the urgency to use the gift that God had given me to the fullest extent. It was the only way and I understood that it was my destiny and I have never regretted it.”