The White House billed it as the first dance event. Yet, the gilded East Room has hosted its share of dance over the years, including performances by American Ballet Theatre and Jerome Robbins’ Ballets: USA during the Kennedy Administration; Patricia McBride and a chandelier-grazing Mikhail Baryshnikov during the Carter Administration; and a strut-worthy cast of alumni from “A Chorus Line” glammed it up during Reagan’s Administration. In 1998, under the Clinton Administration, tap dance savant Savion Glover brought a band of rhythm tappers, old school hoofers like Jimmy Slyde, and Broadway legends Karen Ziemba and Bebe Neuwirth. Then in 2006 President George W. Bush and Mrs. Bush honored Arthur Mitchell by showcasing Dance Theatre of Harlem. These earlier dance events were performed on a portable, postage-stamp sized stage donated by the Harkness Ballet in 1965. 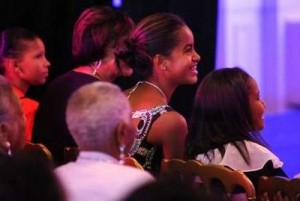 And, of course, some presidential families have had close ties to the professional field. Jacqueline Kennedy brought her young daughter Caroline to Mary Day at the School of the Washington Ballet for creative movement classes. Betty Ford took dance as a child before going off to the famed Bennington College School of Dance in the late 1930s where she studied with Martha Graham, Charles Weidman, and Doris Humphrey. Ron Reagan, Jr. spent a year or so dancing with the Joffrey Ballet. Chelsea Clinton studied ballet seriously at Washington Ballet under the tutelage of Day while her father was in the White House. We know that before their move to Washington, the Obama girls – Malia and Sasha – also studied dance, although from the few reports that trickle out about the girls’ current activities, it appears these days their extracurriculars are soccer and musical instruments. First Lady Michelle Obama served on Muntu Dance Theater of Chicago’s board prior to leaving the windy city. And this past February, the First Family’s inaugural night out was at the Kennedy Center where they took in a program of Ailey classics celebrating the company’s 50th year. Dance has  been a part of the lives of White House residents and guests for more than half a century. 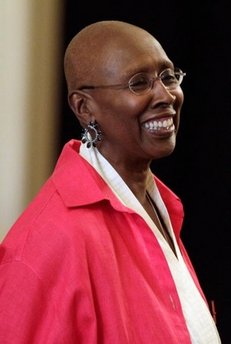 So it didn’t come as a surprise when during the hour-long 5:00 performance inaugurating the White House Dance Series on Tuesday, September 7, 2010, Mrs. Obama noted that Judith Jamison’s “work has been an inspiration to me personally and to the President.” Addressing the long-time dancer, choreographer and director directly, she revealed: “Let me tell you, your picture in ‘Cry’ was the only piece of art we had in our house.”

Jamison, who is retiring as artistic director of the Ailey company next year, was radiant in blousy white topped by a fuchsia vest and sparkling hoop earrings. She was being honored for her many contributions to dance and American culture. “I can think of no better way to begin the White House Dance Series than with an excerpt from ‘Cry’ by the Alvin Ailey American Dance Theater. It was a gift from Alvin to his mother, and Judith made it famous. Now, it is a gift from us to her,” Obama said.

Earlier that afternoon, the East Room rugs were rolled back for about 90 youngsters – trained in various genres from ballet to tap, jazz to modern – to learn from the current crop of master dancers. Nasha Thomas-Schmitt, Ailey company co-director of arts in education programming, led the group through a warm-up of isolations, lateral bends, and stretches. Damian Woetzel offered a brief ballet primer. The former New York City Ballet dancer, now on the President’s Committee on the Arts and Humanities, was emcee for the afternoon master class, one in a series of arts education programs the First Lady has convened for children, covering jazz, poetry, Broadway dance, and other genres. 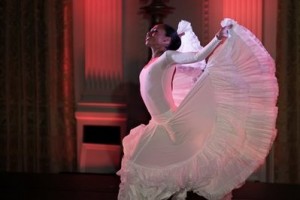 There were bunheads in black leos and pink tights, their hair pulled into neat coils. A gaggle of dancers from Jacques d’Amboise’s National Dance Institute sporting bright blue, tangerine and orange t-shirts stretched out nervously, while Ballet Hispanico’s young contingent in the company’s fire-red t-shirts clustered in another corner. Students also came from the Cab Calloway School of the Arts, Dance Theatre of Harlem, Interlochen Center for the Arts, The Washington School of Ballet, Chicago Multicultural Dance Center, and the Philadelphia High School for Creative and Performing Arts. On the sidelines, Jamison watched with joy as kids in bare feet and ballet shoes, tap oxfords and sneakers maneuvered through the rigorous exercises before learning short phrases from “Revelations”: the opener “I’ve Been ‘Buked” with its smooth and sharp contrasts, the rolling walk for “Wading in the Water,” and a clapping segment from the rousing closer, “Rocka My Soul in the Bosom of Abraham.”

Also on hand were all four Billy Elliotts, the current 12- and 13-year-old phenoms holding down the fort of the Broadway blockbuster. Each Billy – Jacob Clemente, Alex Ko, Peter Mazurowski, and Dayton Tavares — introduced himself and taught a short phrase from the show. Woetzel returned with a basic ballet lesson – four of the five basic positions along with port de bras. Then Super Cr3w broke it down with some hip hop.

The master class culminated in a one-hour performance featuring works that spoke of an American repertoire: from Balanchine, Twyla Tharp, Paul Taylor and Ailey. Balanchine’s “Tarantella,” danced by City Ballet’s Ashley Bouder and Daniel Ulbricht, most certainly recalled the work danced by Baryshnikov and McBride in 1979. The program also included Washington Ballet dancers Morgann Frederick and Jonathan Jordan in a duet from Tharp’s “Nine Sinatra Songs”; a solo from “Billy Elliott”; a hip-hop number from Super Cr3w, and, of course, a rousing excerpt from “Revelations.” Most intriguing, though, was Paul Taylor Dance Company’s excerpt from “Cloven Kingdom.” The work, of course, unabashedly tweaks societal conventions as tuxedoed men shift from human to animal and back. Paul Taylor must have smiled broadly at the thought that this piece was performed at the White House. 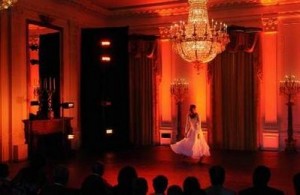 “Dance is the soul of this country,” Jamison told her mostly youthful audience. “I thank you so much for having the vision and wherewithal to put us up here and on the map” she said to Mrs. Obama, gesturing to the dancers on stage. And to the First Lady, who was accompanied by her daughters and her mother Marian Robinson, Jamison added, “Your recognition of these talents keeps us going. Your recognition helps sustain us. Young people,” she exhorted, “you are our blessing. We thank you so much for your energy and dedication and we love you for loving what you do.” And Mrs. Obama offered a final note of encouragement: “Young people, keep going … if you can do it in the White House, you can do it anywhere.”

Lisa Traiger edits From the Green Room, formerly Dance/USA Journal, where this essay was originally published. She contributes regularly to The Washington Post, and other publications.