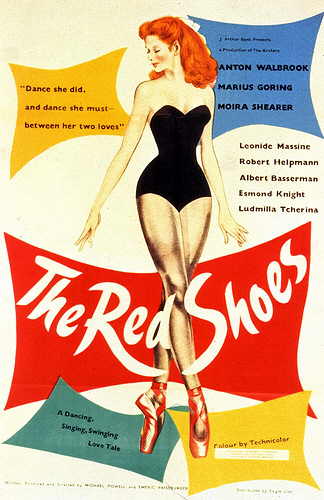 This film’s huge blast of technicolor transforms red-headed Moira Shearer into an unspeakably firey, unearthly creature … her neat figure, fair complexion, and carrot top adding to her uber-deliciousness as the dance-besotted ballerina-heroine.

But the real treasure of The Red Shoes is Anton Walbrook as the Diaghilev-derived impresario, Boris Lermontov. He’s the one with the great lines like, “You cannot have it both ways. A dancer who relies upon the doubtful comforts of human love can never be a great dancer. Never.”

Imagine my joy to stumble upon The Story of Three Loves, a 1953 film broadcast on Turner Classic Movies last night. Shearer stars in the opening chapter of three loosely linked vignettes, playing a ballerina with a fatal heart condition.

Yes, five years after “Red Shoes,” Shearer gets to reprise the “dance or die” theme — her trademark. 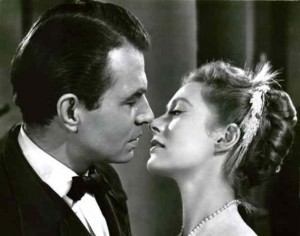 James Mason plays the Diaghilev figure this time, somewhat disappointingly — especially in his climactic kiss with the divine Ms. Shearer.

He gives a bad movie kiss. Not long enough and awkward. Boo.

Sidelined from her ballet career by her funky heart, Shearer steals to the stage — drawn like an addict — after the curtain falls on a performance she has attended as audience member. Dressed in one of those great ballgowns women apparently donned to attend theater in those days, she dances passionately, watched in secret by the James Mason character.

The choreography is simple, readable, deeply romantic, and sumptuously danced by Shearer. Credited to Sir Frederick Ashton and set to Rachmaninov’s “Rhapsody on a Theme of Paganini,” it goes on and on.

Mason, voyeur, interrupts her; and then entreats her to check out his etchings at his boudoir. She agrees — only reluctantly of course — but arriving at Mason’s arty London flat, dances for him while he madly sketches her on his drawing pad. Wow.

Can it be that film goers in the 1950s were actually interested in watching the female figure in its most splendid mode of movement? And that film producers were ready to provide this pleasure to an audience? Here is the adult Moira Shearer, all woman, all dancer. I plan to be reincarnated as this woman in my next go-round.