Every July since 1971 the Italian borgo of Santarcangelo di Romagna, a town in the Apennines, six miles from the Adriatic Sea, becomes the European hub for cutting-edge performance. The summer 2022 edition of the Santarcangelo Festival, “Can you feel your own voice,” thankfully does not allude to pandemic nightmares (i.e., one’s own echoing voice in lockdown). The Festival instead explores how performance can counter the pervasive apocalyptic narratives of our times — and envision new possibilities.

Echoes, a work by Cristina Kristal Rizzo, took place in the cloister of the Capuchin Friars’ Monastery. To reach it, I walk up medieval streets of the borgo to find the green expanse that resonates in so much Italian literature, like Dante’s Divine Comedy. Seated around the stage where a mic and a phone set on stands, we are invited to take our own phones and connect to Facebook for the live streaming of the performance. Like a comet brightening the space beyond the full sunlight, dancer Annamaria Ajmone initiates the action, caressing the space, interacting with our gazes and postures, showing details of her face to the camera, sensing the architecture and the landscape. When the beautiful dancers—Marta Bellu, Jari Boldrini, Sara Sguotti and Rizzo herself—join  Ajmone in solo and collective actions, it is remarkable how the structurally augmented and augmenting choreography maintains clarity while adding complexity. My gaze shifts between the 17th c. monastery to the dancers’ gestural orbits to their delayed dance on FB, in a constellation of temporalities and in a cross-media regeneration of vanishing movements. This ever-dislocating choreographic structure in which performers and audience members browse through details and affects continuously invites us to choose how we echo among ourselves and the environment. The video from FB live may be viewed here. 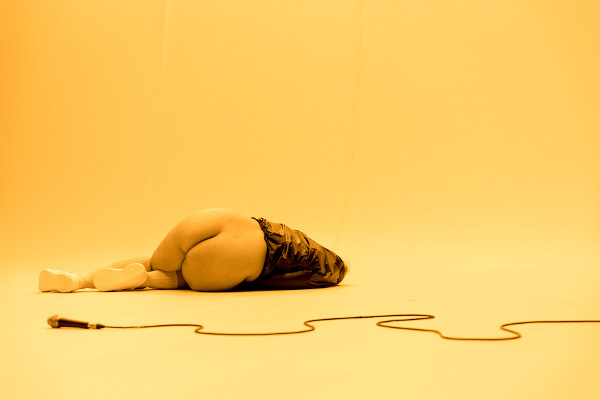 A boost of energy comes from Doom by Zürich-based and Alvin Ailey-trained Teresa Vittucci, with the American interdisciplinary artist Colin Self. Doom queries how gender- and sexuality-based oppressions generate and survive, and Vittucci leads this inquiry brilliantly through a reworking of the myths of Pandora and Eve. Vittucci choreographs her body as a Pandora’s Box opening in a liberation of the forbidden feminine, subverting centuries of policed iconography of women’s bodies. The title seems ironic because Doom is everything but apocalyptic and catastrophic: it is refreshing and fiercely uplifting. And ironic are the dramaturgical devices throughout the performance, like the sudden and loud fall on stage of a huge Bible as the Western repository of so many internalized, patriarchal constructions tumbling over.

How to exit a performance that explores homophobic violence with a reinvigorated sense of love for the world and the future? That is the power of Giovanfrancesco Giannini’s Cloud_extended. In a room of the Casa della Poesia (House of Poetry), Giannini (Naples, 1990) lies on the performance space, quiet, wearing only a wig and skin-toned underwear. A video projection of iconic French diva Dalida, singing Mourir sur scene (Dying on stage) sets the stage with a manifesto of resistance. Like Italian trans activist Daniela Pompili once stated, queer subjects don’t need apocalypses because they live them. Giannini delicately reproduces Dalida’s gestures, taking short breaks to study her or enjoy her. Unlike others who have practiced live mimicry of digital bodies as a choreographic device (Arkadi Zaides’s Archive started this trend), Giannini applies micro-variations of affect to the projected bodies. For instance, when he interacts with the contemporary bodies of anti-LGBTQ+ police, a vibrant tension in his body manifests a sense of rejection of that violence. To reference the naked bodies of Renaissance Venuses, distorted on the screen like an old VHS tape, he folds his genitalia between his thighs, with an expressive poise that filters a sense of disquiet. The dissenting vibrancy of Giannini’s body reaches its peak with videos of him and other people in drag, with glorified and emotional close ups of their faces, quivering through a visual effect, with beauty and presence.

Finally, encapsulating the resistance to our political, human downfalls, I closed my visit to Santarcangelo with Tutto brucia (Everything Burns) by the Italian performance duo Motus, with dramaturgy by Ilenia Caleo. In this rework of Euripides’s The Trojan Women, I witnessed the vitality of the embers under the rubble. The phenomenal Silvia Calderoni and Stefania Tansini, supported by the energy of R.Y.F. (Francesca Morello)’s live guitar and vocals, embody all those who survive destruction, with their damaged yet relentless and incandescent bodies and voices.

Melissa Melpignano (PhD, UCLA) is a dance scholar, writer, and performer. A recipient of the Selma Jeanne Cohen Award for dance research, she works as an Assistant Professor of Instruction and Director of Dance at The University of Texas at El Paso. Her writings appear in The Dancer-Citizen, Dance Research Journal, AJS Perspectives, The Oxford Handbook of Jewishness and Dance, among others.