WELCOME BACK
to
“AMERICA’S FRIGHT FACTORY!“

ANNOUNCER: And now it’s back to “AMERICA’S FRIGHT FACTORY!” [Canned applause and whistles as the camera pans across the set, where workers in Haz-mat suits are setting up the third TRIAL.]

JEFFREY: It’s an honor to be on “America’s Fright Factory!”, Buck.

RIBEYE: Jeffrey, I confess that I’m surprised to see you here. You’re a best-selling author. Top of the charts. Our producers slipped me a copy of a review of your work that says, “Jeffrey Weinstock has taken a deep breath, and inhaled the zeit…the zeit….”

RIBEYE: Whatever. You’re writing the books that people today want to read. Not that I would know. But the titles sound interesting. You’re the author of “Tiny Houses for Tiny Dreams;” “Urban Scavenging;” “A Survival Guide for Post-Professionals;” and “The Bromance of the Rails: Seeing America by Freight Car.” What brings you to “America’s Fright Factory!”?

JEFFREY: Thank you. Well, Buck, I have to tell you that the writer’s life-style today is not what it used to be, even for a best-selling author. The days are over when an American writer could travel to Paris and survive on garden-snails and red wine, shtupping art students and sending hiccupy reports back home. My books are only available for electronic download, and, frankly, the royalties suck. Everything I’ve written about—urinating behind buildings; sleeping in junked cars; and scouring the trash for items to sell—it all comes directly from my experience, which is what makes my voice authentic. I think that’s why my books are so popular.

JEFFREY: I’m an artist. And right now I’m working on a new project. It’s a “how-to” book that will help millions of average Americans save money by teaching them how to refine their own gasoline at home. It’s part of the new, decentralized Micro-economy. But I need seed money.

RIBEYE: In other words, a bailout.

JEFFREY: You got it.

RIBEYE: All right, Jeffrey. You’ve certainly demonstrated your resourcefulness, and your determination to cling to a useless and outdated vocation. So, here’s what I’m going to do. If you are up to the challenge, and can handle the TRIAL that Dr. Cartucchio has dreamed up for you, then “America’s Fright Factory!” will supply you with a full year’s worth of scrap paper and #2 pencils; and, in addition, we will arrange to have your shoes re-soled. Are you ready? 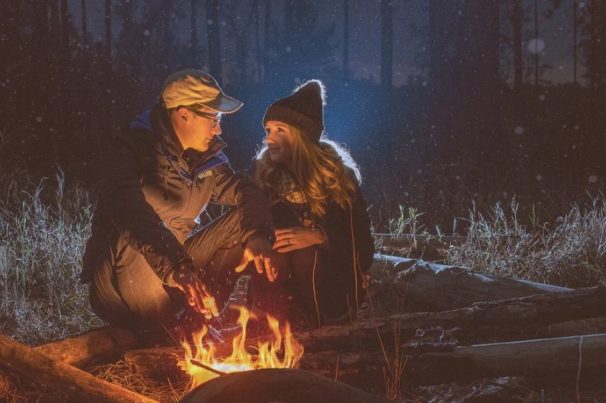 The scene is a campfire in the woods. A young couple, Brad and Alice, are squatting nearby. As they talk, Brad occasionally feeds twigs into the rocket-stove, while Alice weaves rushes to make a basket. In the background, birds are chirping.

BRAD: We didn’t really know what to expect, at first, when we decided to leave Chicago and move into the wilderness.

ALICE (laughing): We were so naïve!

BRAD: I had been working as a software engineer, and Alice was a barista. Neither of us had any survival skills to speak of, and I’ll be honest with you: the first winter was tough. The lean-to kept falling down….

ALICE: With us inside!

BRAD: …and all we had to eat was what we could forage. I got sick pretty much right away.

ALICE: He didn’t know that Elderberry bark was poisonous. I guess you learned the hard way, Brad.

BRAD: When the ground froze, it became harder to dig roots, and we both lost a lot of weight.

ALICE: If it weren’t for our trust in God, and the fact we both tolerate odors pretty well—Brad lost his sense of smell in high-school—we might not have made it through the first year.

BRAD: The real game-changer for us was discovering NewNormal Brands. They make the perfect food for survivalists and prep-steaders. Everything comes freeze-dried, in chunks or powder. And the packaging is environmentally friendly, which was important to us. The containers are air-tight, but biodegradable.

ALICE: We haven’t had any problem with spoilage. As far as we can tell, the bugs won’t eat it.

BRAD: And NewNormal makes delivery easy. Every couple of weeks the Amazon drone stops by and deposits our order in the meadow, so it’s a food source we can depend on. We wouldn’t order so often, but there isn’t a lot of room in the cave we’re using for storage at the moment. Scouting out a larger cave before the winter is one of our goals. A cave that isn’t already occupied, of course. 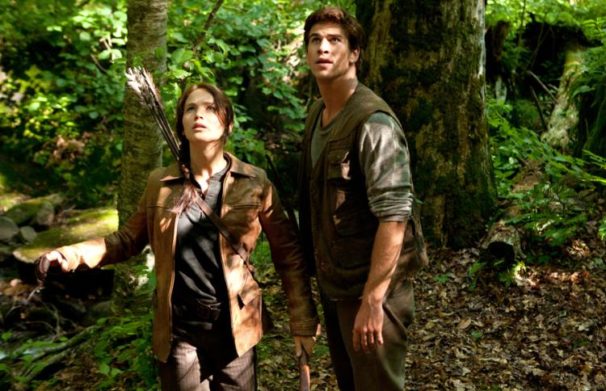 BRAD: Oh, you know I love the variety. When we lived in Chicago, we were what you might call “foodies.” We enjoy Mexican, French, Vietnamese, and Ethiopian cuisine.

ALICE: Not a week went by without our ordering Chinese take-out.

BRAD: That was something we really missed. But with NewNormal, you can make pretty much anything you want, right here in the forest! They even give you recipes.

ALICE: Remember I made you Peking Duck for your birthday?

BRAD: The skin was so crispy!

BRAD (shaking chunks of freeze-dried food into an iron kettle): Tonight we’re having a French dinner: Quenelles de Brochet with Sauce Nantua, and Potatoes Dauphinoise. I wish you were here to share it with us.

BRAD (chuckling): No, we treasure our isolation. But I wish I could share with you how good it is! I can’t smell it cooking, of course.

ALICE: It’s not that bad.

BRAD (holding a box of NewNormal up to the camera): Even if you’re not a prep-steader, NewNormal will simplify and improve the quality of your life. It’s the food of today!

RIBEYE: Have you ever tried that NewNormal stuff, Dr. Cartucchio?

CARTUCCHIO: Can’t say I have. Not yet. It might be safe to eat, though. Freeze-drying might kill some pathogens. I doubt it would protect you from Mad Cow disease.

RIBEYE: All this talk of food is making me hungry. As soon as this show is over, I’m going to grab some lunch.

RIBEYE: Thanks, Doc. So, what have we got for Jeffrey today?

CARTUCCHIO: This is a good one, Buck. We know Jeffrey is a literary type. Probably likes to read, as well as write. So we’re giving him more books than even he may want. In just a moment, our team will remove the scaffolding. OK, there it goes.

RIBEYE: Whoa! What is that thing? It’s gigantic.

CARTUCCHIO: It’s a stepped pyramid, like the ones in Egypt, but made entirely of used books. Well, they say they’re used. Who knows if anyone ever read them? At the top, you see, there is an old library table, with a heavy brass lamp on it. Jeffrey’s TRIAL is to climb all the way to the top of the pyramid, sit down at the table, and turn on the lamp.

CARTUCCHIO: Ah, but you don’t realize — many of those books have been sprayed with Covid-19, and Jeffrey won’t know which ones are safe for him to touch. He’d better be careful! There’s a time-limit, too. If he doesn’t light the lamp in four minutes, he loses the bailout.

RIBEYE: You’ve surprised me this time, Dr. Cartucchio. Doesn’t spraying the books with Covid ruin them? You could take the pyramid apart and sell those books afterward.

CARTUCCHIO: Impossible! No one wants those things. You can’t give ‘em away. Even libraries won’t take them. The whole kit and caboodle will have to be torched when we’re done with it.

RIBEYE: I see. In that case, let’s get going. No need to waste any more time. You’re not much of a marksman, Dr. Cartucchio, so allow me to fire the starter’s pistol. [He takes the pistol and fires it into the air, Bang!]. There he goes! Jeffrey’s at the base of the pyramid now. He’s looking for a hand-hold. Oops! He just sprang up to the first step. Hey, he’s not stopping. Doesn’t he know about the Covid?

CARTUCCHIO: Of course, he knows. Everybody knows.

RIBEYE: He’s going up anyway. Leaping up the steps!

RIBEYE: He’s reached the top already! He’s sitting at the table, and catching his breath. He’s turned on the lamp! But, wait a minute, what’s he doing now? What’s he got in his hand?

CARTUCCHIO: It’s a book, you moron. That man is reading.

[A cloud of acrid, black smoke passes in front of the grandstand ]

RIBEYE (coughing): What’s that smoke? Where’d it come from?

CARTUCCHIO: Oh, dear. It looks like someone gave the signal too early. They’ve set the pyramid on fire. What a pity! Better put your mask on, Buck, those books won’t burn cleanly, and, you know there’s Covid in there. As a matter of fact, I think I’ll be going now. 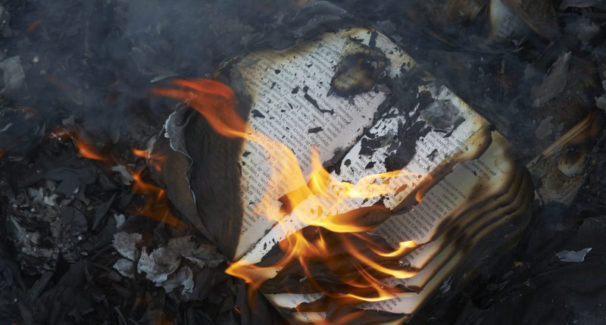 CARTUCCHIO: This has been lots of fun. If you ever want me back, Buck, you know what to do. Just phone my agent.

RIBEYE: Sure will, Doc. I want to have you back on the program real soon. And a big thanks to all our viewers out there in TV-land. We’ll be back again, next week, with another thrilling episode of “America’s Fright Factory!” created solely for your enjoyment and with no other purpose in mind, cross our hearts. Till then, keep safe. And remember it’s a dangerous country out there. You can’t be frightened enough!