How Cali staves off COVID: by reviving the drive-in 2

There is a certain group of go-go people in Los Angeles that even COVID-19 cannot keep down. They are F.O.C.s, also known as “Friends of Chris.” The man of the evening (he hosted the event), Chris Nichols, is a modern-day town crier, a staff journalist at Los Angeles Magazine, and the founding force behind the erstwhile Modern Committee (MODCOM) of the Los Angeles Conservancy. While other people “throw birthday parties,” Chris, wary of a pandemic, realized a longtime fantasy. He “threw a drive-in” in the bedroom community of Downey, California.

Wow. Now, that’s impressive. The puzzle pieces fit perfectly. This is Los Angeles, and we simply must go to the movies. Are you hearing me? It is “essential”! Separately, Chris was already cognizant of Downey, whose great cultural claim to fame is as the locale of the oldest-ever-operating McDonald’s restaurant. Little has happened there since — until Saturday night. That’s when Chris rented the parking lot of the Downey Women’s Club; blew up a big movie screen; and projected onto it a “classic film” that would not tax the brain: Village of the Giants (1965). He invited a gang of classic car collectors and lots of equally obsessed (but not about cars) people who found incredibly creative ways to enjoy a movie from the comfort of a Covid-free cocoon. 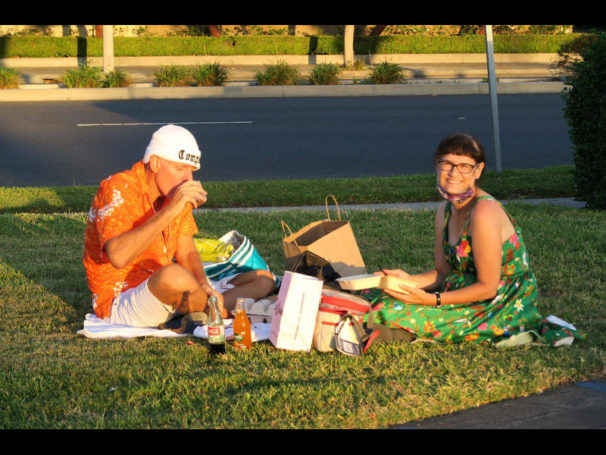 The stir-crazy Southern Californians were so deeply grateful for something, anything, to do, that they politely endured the movie, which starred none other than Little Ronnie Howard. There was a Zoom component of the evening; you could sing your lungs out in the privacy of your own germs; and the movie’s cool soundtrack, courtesy of Jack Nitzsche, was broadcast over an “available” FM radio frequency. A big payoff came in the form of a fabulous dance solo in “Village of the Giants” by artsmeme friend Toni Basil, seen in the video below in tip-top form; she is really a stunning dancer.

Chris, when not being a fun-loving nutter, is a very responsible, solid citizen. His draconian rules for his party extended to how to queue at the bathroom. All guests had to wear masks (although outdoors) and practice social distancing. Toward that end, the Chief Drive-In attendant, Kent, carried a six-foot stick with which to measure distances — and to whip the disobedient into shape. That show was way better than the movie!

2 thoughts on “How Cali staves off COVID: by reviving the drive-in”