For those who recently watched THE SCARLET PIMPERNEL (1934) on Turner Classic Movies, a special Jack Cole connection has come to mind from 86 years ago.

Our story involves the film’s glamorous stars, Leslie Howard and Merle Oberon. The duo, co-stars of “Pimpernel” were on a touring junket tied to the movie’s release on December 23, 1934.

While in New York, they made a stopover at the ravishingly chic St. Regis Hotel at 2 East 55th Street.

Typical for the era, a ballroom/cabaret room was a hallmark of the hotel: the stylish “Maisonette” boite, located one floor below the iconic lobby bar, the King Cole Bar.

The Maisonette had a house orchestra. According to Wikipedia, it was William S. Paley, president of the CBS and an investor in the St. Regis, who “encouraged Johnny Green to form what became known as Johnny Green, His Piano and Orchestra. The orchestra, based for a time at the St. Regis, featured Green’s piano and arrangements, whose harmony and mood were among the most sophisticated of the day.”

But for nightclub dancer Jack Cole, undoubtedly on his high horse after recent triumphs at the (competing) Rainbow Room, Green did not swing to his liking. As with many of Cole’s beleaguered accompanists, there was no love lost between the two men. During his tenure at the swank St. Regis, Cole publicly berated Green in a hideous, aggressive, crazy way. This episode I have written at length in my manuscript (we are hoping) soon to be a new Cole biography.

But back to the St. Regis. Cole, then still in pre-Hollywood days, was as gobsmacked by movie stars as any of us. So he was pleased to have two super beautiful people in his audience digging his act: Merle and Leslie. Said Cole,

Drinks with Leslie and Merle, who were then in the throes of torrid extramarital affair. (Howard was married, Oberon not.) Merle’s admiration of dancers may have been heightened … because … she herself simply could not do it. Merle Oberon, possessed of two gorgeous eyes, was weighed down by two left feet. For as she openly admitted, her acting career was predicated on one thing only, her great beauty.

Fast forward to 1944, and Cole was none too pleased, a decade later arriving in Hollywood to stage dances for Marlene Dietrich’s Kismet (1944), to find Johnny Green ensconced, and ruling the music department roost, at Metro-Goldwyn-Mayer.

Yet another decade later, also at MGM, Green music-directed Vincente Minnelli’s Kismet (1955), the film adaptation of the Broadway musical. No one but Cole could stage his iconic Broadway choreography for this movie. So he got that gig, although he and MGM were not a great fit. Near fisticuffs ensued between the two men, Cole and Green — screeching battles over tempi that producer Arthur Freed had to adjudicate (according to Cole, in Cole’s favor).

Ratchet back to the time of the first Kismet, in 1944, and the reliably plain-spoken Jack Cole dancer, Ethel Martin, described one of her first Hollywood gigs: dance-doubling for none other than our favorite (gorgeous) klutz, Merle Oberon. In an interview in 2003, Ethel Martin was joined by her husband, George, who with his wife was one of Cole’s stalwart dancers.

Ethel kicked the story off with an assist from her husband: “Jack [Cole] told me, ‘I know Kenny [Williams].’ He was then assistant to – who choreographed for Fred Astaire?” Replied George: “Hermes Pan.”

Continued Ethel: “And Kenny was [Pan’s] assistant and now Kenny was going to be doing this film called The Lodger. And he hired me. Well, after $40 a week, my first salary with that was like $100-and-something, And I wasn’t on that [salary] longer than a week when they came to me and said, ‘Would you like to be Merle Oberon’s dancing double’?

“But you don’t realize that you work for four weeks or three weeks and then it’s over, and you do something else — and that you go from film to film.”

When asked to clarify the meaning of a “dance-double,” the always-cheeky Ethel replied, “It means that when her gorgeous face moved aside for two seconds and she was asked to do something, I had to do it.” 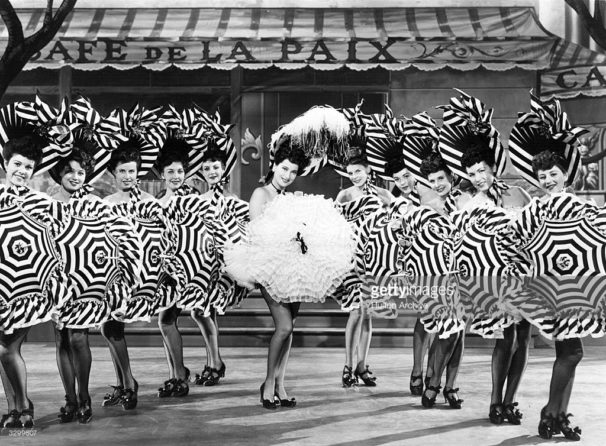