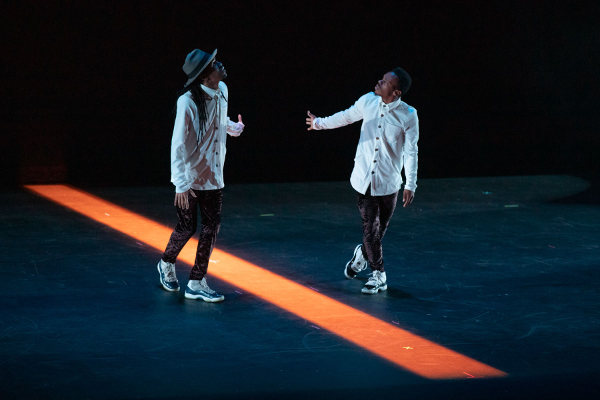 Oh the seasons, they come and they go. That’s easy enough for us mortals to say. But for a monster-scaled live-arts presenter like the Center for the Art of Performance at UCLA, it takes both brains and brawn to pull off a full season. You live it, breathe it, push it, pamper it, and promote it. It’s a boat load of work! To do this, you truly gotta believe that the arts matter. And by the time the season wraps, in spring, and curtain drops on the finale, as it did on last week’s season-capper, “Love Heals All Wounds,” it … is …time …to …party!

That’s exactly what happened May 23, following the political dance-pageant starring Jook man Lil Buck and his popping partner, Jon Boogz, pictured here with violinist Jason Yang. (That very night artsmeme was in London seeing Pam Tanowitz Dance’s Four Quartets which will be presented at Royce Hall during CAP’s 2019-20 season.) It happened at one of the nicest party venues in Los Angeles, in the cool evening air of Royce Hall’s generous back patio, a powerful community gathering point. The photos aptly show the energy that makes CAP special. ‘A’ is for Art at CAP, and the esteemed series attracts the tip-top groundbreaking artists, happenings and events.

But ‘A’ also stands for Audience. For CAP Executive and Artistic Director Kristy Edmunds, the audience rarely leaves her consideration. That does not mean she panders; in fact, she challenges. And it doesn’t mean she follows: she leads. But she also listens. Aiding her in her process are the many talk-backs, pre-talks and audience engagement activities that require so much planning around performances. And since CAP is part of a university system, there is always something to engage UCLA students. Kristy herself often introduces shows before taking her seat — whether at Royce or at CAP’s “satellite” station The Theatre at Ace Hotel downtown. And you feel her having fun. It’s part of the experience.

Here is CAP UCLA’s dance season commencing in the fall of 2019.