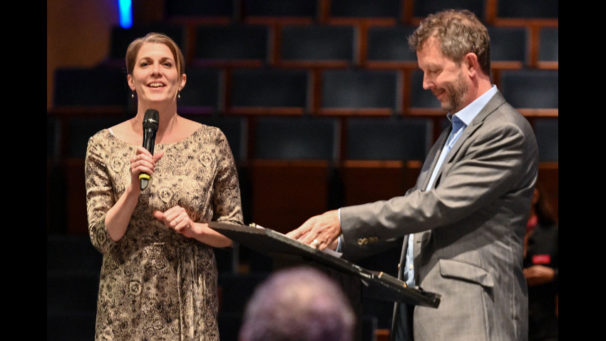 BODYTRAFFIC returns to The Wallis as 2019/20 Company-In-Residence. Tina Berkett chats with Paul Crewes.

Heidi Ducker, artistic director of Heidi Duckler Dance, describes "The Chandelier," based on novel by Brazilian writer Clarice Lispector, a portrait of a family living in the ruins of a colonial society.

Achinta McDaniel, artistic director of Blue 13 Dance Company, anticipates the world premiere of "Terpsichore in Ghungroos" at The Wallis.

A big gang of arts journalists crossed the thin line to mount the stage of the Wallis Annenberg Center for the Performing Arts Tuesday evening to toast a special occasion whose time has come. In his annual upcoming-season announcement, The Wallis’s artistic director Paul Crewes, shown in photo with the Beverly Hills theater’s CEO Rachel Fine, dared go where no man, woman or performing arts presentational series has ever ventured. In announcing his upcoming season of theater, music, and film, he let drop that the new dance season is comprised solely of local Los Angeles dance troupes. With nary a single dance import, Crewes is opting to buy local. This simple proclamation fostered a feeling of not just arrival but correctness in a city where our local companies have long felt second best.

The notion of an all-L.A. dance lineup is something the now six-year-old Wallis has been inching toward inexorably. Like others in town — first and foremost, the great Los Angeles County Ford Amphitheatre which has nurtured every single company on this roster, The Broad Stage, The Soraya, Dance at the Music Center, CAP-UCLA, Pepperdine, the Carpenter Center and others — The Wallis has lately interspersed local troupes with the visiting companies in its dance series. And that was a long time coming as well, to the consternation of bulwarks like Lula Washington Dance Theatre next season marking its 40th anniversary, and Heidi Duckler Dance, approaching its 35th. But while it’s a risk, an all-L.A. dance line-up de facto proclaims that local companies have reached a commercial and artistic threshold. There are many reasons — quality among them — it has taken so long, but let’s rather stay in the space of ‘now,’ and see where it leads us.

Bodytraffic, it was announced, also has a special collaboration, The Minghella Project, produced by the Wallis as a world premiere dance piece with director/choreographer Jonathan Lunn and the late celebrated film director Anthony Minghella. One expects that concept by Paul Crewes, who brings his special relationships in the U.K., will attract the film-interested as well as a core dance audience.