Everyone has the right to respond to our crazy age as best they can. And who am I to say that the eighth annual staging of “9/11 Table of Silence Project,” a “prayer for peace and healing” choreographed by Jacqulyn Buglisi for 100+ dancers, is not a valid expression of grief and anguish in still-traumatic memory of the horrifying attack on the World Trade Center in 2011.

And yet, I admit to finding something untoward in our bustling national center for the performing arts turned over to a pseudo-mystical pageant as it will be Tuesday September 11 in the early morning. I object to the sight of young dancers in formations that would make Mao or Stalin proud, partaking in a conformist, secular rite that transmutes their vital bodies into vessels of cult worship — faces and palms turned upward into the sky, seeking benevolence from a Meanie God. 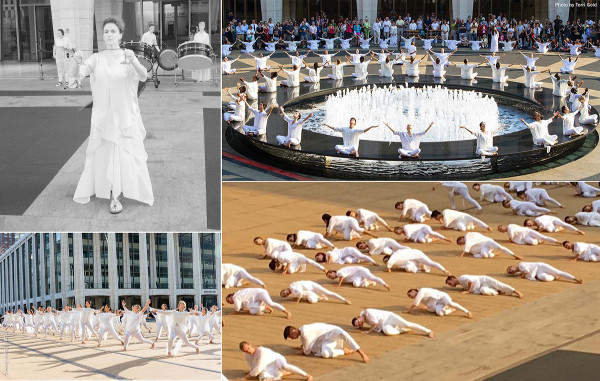 The 9/11 Table of Silence Project is recognized (it would be hard to ignore) by proclamations from Governor Andrew Cuomo and Mayor Bill de Blasio for uniting the community through dance. It has been deemed worthy of the support of Howard Gilman Foundation; The Shubert Foundation; Heinz Family Foundation; Caroline Howard Hyman & Edward S. Hyman, Jr.

Those good souls aren’t dance critics, however. In the New York Times, Gia Kourlas was less than entranced by the “performance ritual.” But … who listens to critics? Critics are so … critical.

With no offense intended, are we swamis in India? When did American dancers eschew their legacy of freedom and individuality manifest in the body (which gave birth to modern dance) to transmogrify into homogenized hordes garbed in priestly robes, marching like doomed zombies, incapacitated by the burden of their fate? Howling and whining into paper megaphones like bruised animals? Chiming little gongs as though that galvanizes “healing” — what is healing anyway and why does watching this nonsense offer it?

Since its inaugural performance, seven years ago, the “9/11 Table of Silence Project” has spread its cloak of peace, love, and audience-stultification to numerous events including Exhibition at the Museo dell’Ara Pacis in Rome; the University of California/Santa Barbara to honor the student victims of the Isla Vista attack; Syracuse University in remembrance of the 35 students lost in the Pan Am Flight 103 over Lockerbie; Day of Forgiveness in Perugia and Umbria, Italy; and the Coalition Against Trafficking in Women.

It is in essence victim art, precisely what the great dance critic Arlene Croce so presciently warned against in her notorious writing on Bill T. Jones’s “Still/Here” in 1994. Croce, a critical critic, in drawing a clear line between art and social work, was pilloried and castigated for her essay. Dance has been been the worse for it ever since.

Alternately, I hew to Martha Graham’s robust dance-response to her seemingly hopeless times, sending marching, stomping, leaping maidens onto the stage in Steps in the Street (1933). This work (it miraculously survives) provides a tumultuous and thrilling viewing experience. Many motifs similar to those employed in “Table of Silence” appear: performers in anguish, unison, repetitive movement, tribal tone, but in Graham’s case it adds an essential element: choreographic genius.

2 thoughts on “Dance-trance at Lincoln Center”