Hitting the mark with Robin Mitchell 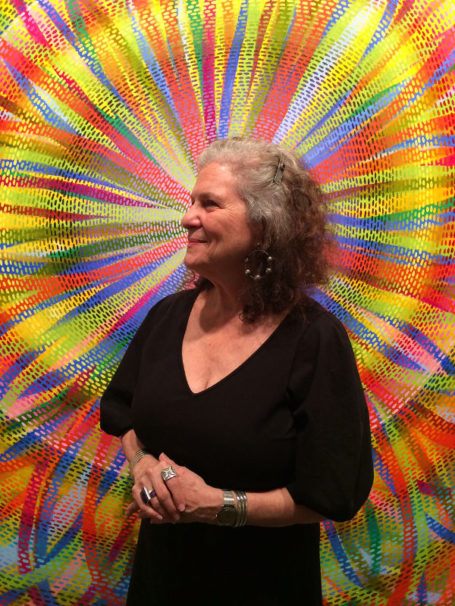 To see the world in a grain of sand is a goal shared by many creative people. In the case of Robin Mitchell, she sees the world in a mark. She’s a non-representational painter and, unlike others who work in that genre, her paint doesn’t sprawl, drip, stain or consist of hard-edge color blocks. Mitchell uses small, controlled dabs of color—marks she calls them. That’s not to be confused with pointillism: tiny systematic networks of modeled color and light. No, her marks vary in size, shape, direction and color. 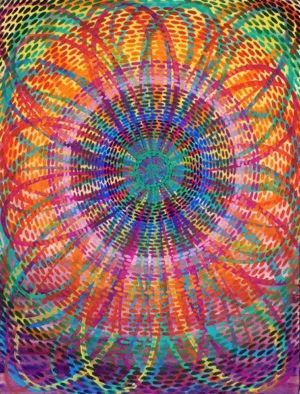 In previous years, those marks may have run horizontally, as in her code paintings circa 2007. The webs of layered color bands made of dabs and swirls were as compelling from 20 feet away as they were up close. In fact, her paintings invite scrutiny from several different distances.

By 2009 those left-to-right strata might add inky black striations next to taupe-violet bands and white ridges—with random circular and spinous blotches randomly placed on the field. The effect was increasingly vibrant–like a cutaway view of a colorful subterranean insect colony, alive with movement and teeming with portent.

Mitchell said the following in a catalog for the 2001 Venice Artwalk show: “My artwork is involved with the act of mark making and how the mark in its abstract nature is able to communicate an image and suggest themes tangible and intangible.” 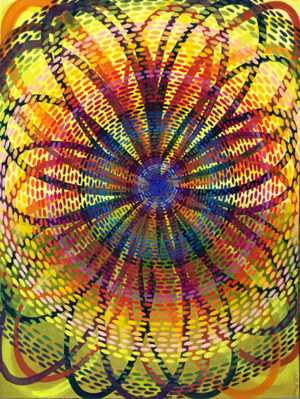 In her current show at the Craig Krull Gallery in Santa Monica there are a few sizable oils on canvas and smaller gouaches. All of them are rectangles that hang with their long sides vertical. The marks mostly move out from the centers of her 16 recent paintings. They blossom, ripple, pulsate, expand and compress, and vibrate. They might be seen as vortexes or explosions.

“I like the word ‘emanation,’” Mitchell offers, from her Santa Monica home. “It means receiving as much as giving. I have a classical education but I work in abstraction because I saw more possibilities for open-ended communication. When I thought about it, I had the epiphany that all of the elements that I need are contained in the mark.”

Painter Tom Knechtel designated Mitchell an “abstract symbolist” some years ago and, in light of her avowed kinship with the Swedish symbolist Hilma af Klint (1862-1944), there’s some veracity to that claim. But Klint was tied in to the occult (unlike Mitchell) and her colors were mostly somber. “I can really identify with her work,” Mitchell says, “how she was able to create a whole symbolology in a painterly way. There was meaning in her shapes without them having to be representational.” 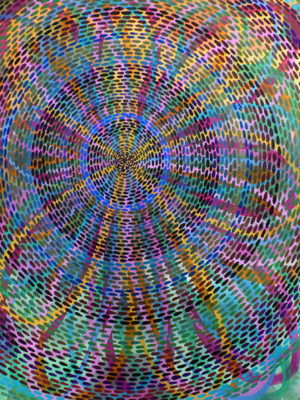 Mitchell’s colors jump off the picture plane at you. It would be too easy to call them psychedelic. Her pieces play with color and temperature in sophisticated and fascinating ways that will never be seen on a Deadhead’s t-shirt. The underpainting of “Fissure” dances while the overlaid concentric circles are quite focused. From the center to the edges, “Emanation” moves from cold to cool to warm to hot to cool again. The hot yellows, greens and oranges of “Dog-Eared” evoke tropicalia, which bespeaks her longstanding interest in ethnic arts and crafts.

“You can look at my colors and how they change,” she explains, “as they pass through the rungs of the painting, and take on different shapes and hues as your eye moves outward. I’ve always felt that color is one of the strongest tools we have in communication.”

“There’s no narrative in my work,” Mitchell discloses. “But people see all kinds of different things in it and they tell me about it. I always take the time to listen because I can learn from them.”

Mitchell will give an artist’s talk Sat March 24, 11 am, Craig Krull Gallery