Marilyn to have succeeded Bette in ‘Of Human Bondage’?

“She said she’d settled the suit with Fox. They had fired her from Something’s Got to Give. She’d be restarting production in about a month. And she had signed with MGM to remake “Of Human Bondage” to be directed by Henry Hathaway.”

The words above were spoken by Jane Russell, apropos a conversation with her friend, Marilyn Monroe, shortly before her death August 5, 1962.

A December 19, 1961 letter from Milton Rudin (Marilyn’s attorney), invited Monroe to attend a viewing of “Of Human Bondage,” starring Bette Davis. The notion of Monroe as the slatternly “Mildred” is a loss for film history. 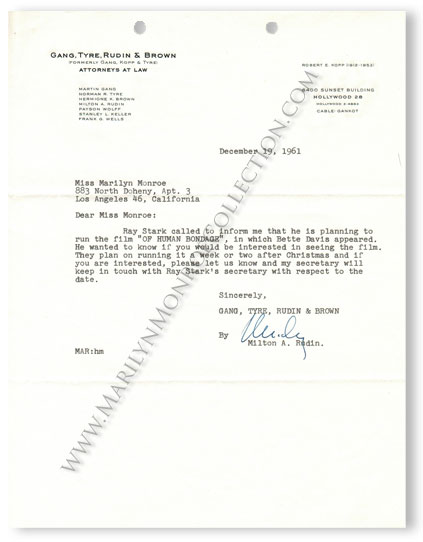